You think you’re a DIYer? This guy puts your DIY to shame: he makes his own TUBES. He’s been a radio tech since 1959 and obviously knows his craft. His personal site is http://paillard.claude.free.fr (it’s in french.) 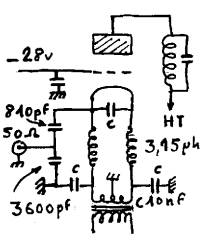 After various tests we arrive at the assembly above, which gives 40 volts peak to peak of 3.5 MHz on the filament, without high voltage on the plate. But this falls to 26 volts peak to peak with the applied voltage, so at a level sufficient to properly conduct our poor 10Y which delivers low power and the formula below the initially raised fears: gain with grounded grid A = (Î¼ +1) x (Rp / Rp + Ri) Unfortunately quite low. So back to the mountains where an attack in tension, without power grid by with our low power.