After assiduous work by the whole group, TSO will convulse people all over the world with their new album “Night Castle” on October 27. They are preparing for the issue since 2005, after the huge success of “The Lost Christmas Eve”. Paul’s comment for Night Castle was that they delayed for the issuance of this album because their aim was to be perfect and they re-write and re-record just to be sure that the result will worth the wait. The opera takes up 21 of the two-disc set’s 26 songs. There are and five bonus tracks which include “Nutrocker” and interpretation of Carl Orff’s 1930s composition “Carmina Burana”. O’Neill has and intention to re-release of “Beethoven’s Last Night”. 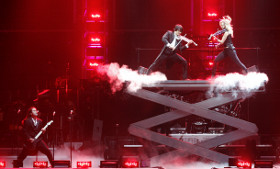 The Michigan’s inhabitants of Grand Rapids will have the opportunity to enjoy the songs of Trans Siberian Orchestra for the first time on 2nd January. The rock orchestra will make a grandeur tour and Grand Rapids will be one of the 85th stops of it. It will be held in Youngstown, Ohio on November 1. As usual, $1 of the sale of each ticket will be endowed to God’s Kitchen to help feed the needy.

For a big surprise for the residents of Glendale, breathtaking group will be delivered two performances on 6th December at Jobing.com Arena. For the loyal fans of the band, Trans Siberian Orchestra is making a combination of the arena-rock spectacles of Pink Floyd and the musicality of Queen. One of the good reports was that Billboard praises TSOs winter tour and said that they were given amazing performances with great combination with Christmas carols and dazzling visuals.

On 9th December Trans-Siberian Orchestra fans will have the possibility to delight on two amazing shows. They will be held on Wednesday, December 9 at the Verizon Center in Washington, DC.