A year and a half ago, I bought Clutch’s Blast Tyrant album on CD. Immediately, something seemed. . . off. I am still new to the audio nerd scene, and was newer then, and I could not place the weirdness.

Later, I read a couple articles in Guitar World about recording music especially hard rock and metal and the author discussed mixing and mastering. Also, in reading up on the loudness wars, I became more and more attuned to the concept of over-compression. As I listened to Blast Tyrant more, it seemed to me the album was mastered by a pop guy as opposed to a rock guy or at least more for a pop sound. It seems more compressed than Clutch’s other efforts. Don’t get me wrong: I think it has some of their strongest song-writing and music of their career. I just think the audio quality seems less natural and therefore off-putting. 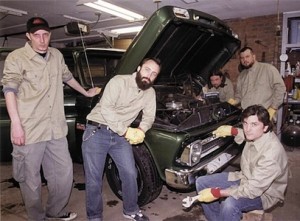 Then, a couple months ago, I found an interview on YouTube with Neil Fallon (vocals) discussing recording techniques. He mentioned that Blast Tyrant was the first and only album Clutch ever recorded digitally. Before and since, they had only ever used digital recording for scratch tracks and as an easy tool for writing. And even though I have only ever heard their music from a digital format (aside from live), I could spot something was off. Vindication!

My hypothesis: The digital recording, mixing, and mastering process lent itself to a more compressed end result. Their other work has been done in a pure analog fashion, and not put on to CD or MP3 until mastered for the analog format. I think different media provided different sensibilities. At any rate check out the album because it rocks. And then, for good measure, check out Robot Hive/Exodus which came out the following year. It has a very different vibe. Is that because of the analog nature? Maybe. But in the end, if it is Clutch, it is going to ROCK!