Innovation is everything. The best audio companies in the world are in a constant race to create better and more original components. The market is flooded with amplifiers, speakers, pre-amps, and all kinds of players and converters. Each year you find out that you actually need another component that was just released to make your listening experience perfect. As much as this incredible variety is to be cherished, it should also be noted that sometimes, the best equipment was made forty or fifty years ago. As the good old saying goes: “New is not always better”. This is why we bring you a list of 5 best audio amplifiers ever made. It is, of course, incredibly hard to make such a list because the criteria will vary from person to person. So it would probably be better to say that this is one possible list of the best audio amplifiers ever made. 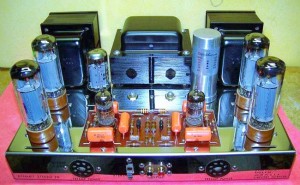 Dynaco ST-70 is definitely the most popular one. Designed by David Hafler, it was released in 1959 and remained popular for nearly 30 years because you could modify it many different ways. Dynaco ST-70 was also called the “poor Man’s McIntosh.” What is more important, it had an extremely clear, three-dimensional sound that is also a trademark of many amplifiers that are made today.

McIntosh 275 is a legend, made by an equally legendary company. It was produced from 1961 until 1973 and it truly became a synonym for perfection. Recently, the company released a limited edition remake that shone a brand new light on this incredible piece of audio equipment. This amp enabled the removal of the very audible and very unpleasant “notch” distortion that, up until then, prevented the moving away from the power limitations of Class A design. The remake of this amplifier “has all the features to meet the needs of today’s music enthusiast, while preserving the qualities that have made the MC275 the most revered McIntosh tube amplifier.”

Phase Linear 400 appeared on the market in 1972, created by Bob Carver. The best quality of this amp was, by the opinion of many sound enthusiasts, the fact that it produced a neutral, soft and incredibly life-like sound. It is often compared to another amp that came from the same shop – namely, Phase 700 – that was generated a bigger wattage/voltage. And the best thing about it was definitely the price of about $500.

One can’t help but also mention the Phase Linear 700 that is considered to be among the first high-powered amps of our time. This amp was stronger than most made before it and had a cleaner, uncolored sound with low-distortion. Another innovation was the biasing transistor which was positioned near the unit’s heat sinks. This resulted in another typical feature of the amp: the longer you played it, the better it sounded. It also enabled the clean reproduction of high frequencies and no distortion in the bass ones.

McIntosh MC3500 is another timeless classic. Many consider this to be the best amplifier that was ever made. Interestingly enough, it was released in 1968 as the MI350 for commercial applications and ever since then, it is throwing a huge shadow over all other amps, thanks to an extraordinary 350 watts per channel. The MC35000 is the consumer version and it was precisely the amplifier that made McIntosh into the giant among the audio equipment producers that it is today.