A giant wall of sound to defeat the Germans? The ultimate tweeter? Here is a satirical look at “failed audio projects” through the ages.

The Amplifier Institute is a great site to waste some time if you’re into weird sound. This is a great collection of pictures of seemingly audio-related devices from the annals of history. See if you can figure out what the heck they really are.

Can you hear me now? 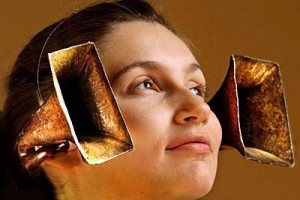 This remarkable device was invented by Frenchman Jean Auscher as an acoustic navigation device in case of radar failure on small vessels. Shown at the 1960 Brussels Inventor’s Fair, and, one suspects, nowhere else ever again.

The lady’s model: according to the information I was originally given, this Victorian-era device was used to aid communication between sailors shouting between ships. However it also stated that the horns were made of papier-mache, which is not a material noted for its durability under seagoing conditions. Personally I suspect it is a hearing-aid, possibly for use at concerts.