There once was a band from Liverpool, England.

A railway station in Liverpool decided one day to celebrate the Fab Four’s accomplishments by creating an artwork topiary recreation of the Beatles outside the station. The artwork, which took 18 months to grow and shape, was unveiled a couple of months ago.

Earlier this year, Ringo Starr appeared on a show about a week after launching Liverpool’s celebrations as the European Capital of Culture, and told BBC chat show host Jonathan Ross in an interview that he missed ‘nothing’ about the city.

Well I guess some Liverpudlians (yes, that’s what they call themselves) got a little touchy about his “cutting remark” (irony to be revealed shortly.)

People in Liverpool woke up one morning to find out that the figure of Ringo Starr in the plant sculpture was beheaded. The whisper around town was that the hack job was retribution for Ringo’s comment about the city. Of course, not everyone feels the same way about Ringo. 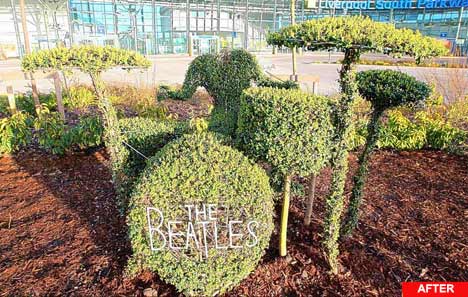 Of course medics topiary experts were called in to repair the work at Liverpool South Parkway train station in Garston.

Frank McKenna, of business network Downtown Liverpool, said that 67-year old Ringo had “shot himself in the foot” an that “People have long memories and one can only think that this attack on his figure is calculated to send a message of disapproval over what he said,” he explained.

This was the second time the Fab Four artwork had been damaged at the station – Last time someone squashed Ringo’s head. This time I guess they wanted to finish the job properly.

British Transport Police are investigating and extra security is being considered. The moral of the story is: Don’t piss off people from Liverpool.

The head is yet to be found.