Many people worry about their computers being hacked. Very few worry about eavesdropping used on their printers. In the May 2009 issue of Scientific American, an article talks about potential office hacks using surveillance tactics, one being recording and analyzing the sounds made by a printer. So far, the research has been done on dot-matrix printers. These are the old noisy kind; however, they are also still in commercial use by industries like airlines, banks, and hospitals (each of which prints sensitive information).

Dot-matrix printers create dots on a piece of paper by use of several tiny pins, aligned in a column, that strike an ink ribbon positioned between the pins and the paper. This process creates an audible sound that can be recorded and analyzed using computer software code to decode the printed characters. 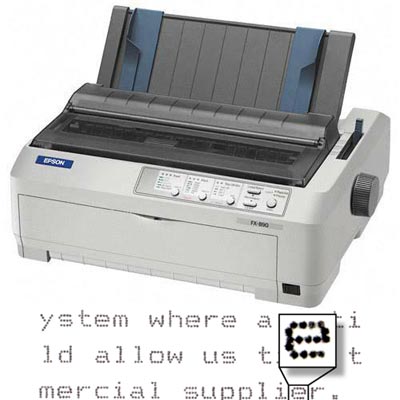 The process of decoding words from the sounds of a printer start by breaking down the parts. Even at this stage the human ear can discern one line of a printer’s work.

Computer code is then used to break down the printer sounds into word parts.

The process of extracting information from the dot-matrix recordings is not exact. Once the process of breaking down the sounds into words, the next step is pretty much guessing the characters that make up the word. Much like playing Jeopardy.

The research so far is on dot-matrix printers, notably, because of their noisy characteristics and also since they are still in use in business settings? However, the same principles could be applied to the more widely used ink-jet printer.