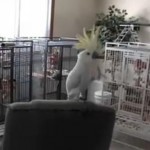 Isn’t it great how humans can sing or dance rhythmically to music? It’s a shame no other creature can . . . or can they? I think I just found my new wingman: a bird named Snowball. He can dance, sing, and also has a pretty good taste in music. Check out this video where he is dancing to Queen’s Another one Bites the Dust.

Scientists believe parrots, like Snowball, may posses the capability of dancing to the rhythm of songs. Why would birds and apparently elephants also have this capacity of dancing to music, like humans, but apes don’t? They think it may have something to do with the ability to mimic sounds. If that is the case they say other animals like dolphins, seals and walruses may be able to learn as well. Scientists analyzed frame-by-frame videos of similar birds like Snowball and they noticed the rhythms were too perfect to be mere coincidence. There is no denying Snowball can dance.

Here’s another bird that puts an impressive display of chirps and dance moves. Not unlike the guys out clubbing, this bird is out to impress the ladies.

Dr. Oliver Sacks, a British neurologist, recently wrote a book where he states that music is wired into the human DNA. He goes on to cite various examples to support this. We can add birds to the list of animals that show this trait.