Project MEDUSA or Mob Excess Deterrent Using Silent Audio is the original telepathic ray gun that works by sending a weak microwave into someone’s head, emitting noises only the person in the wave’s path can hear.

Here is a concept diagram of how the microwave audio device might work. 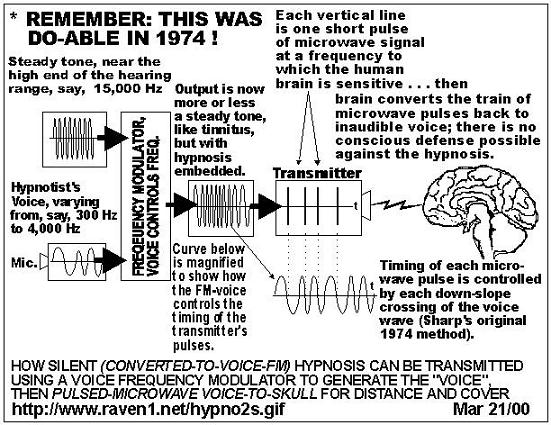 The number one risk preventing the MEDUSA project’s success is not radiation (as some might believe). It’s actually the risk of brain damage from the shock waves created by the microwaves. There are concerns that the project will spawn other uses even if it cannot be used to communicate a message to individuals. It still has the potential to be used as a death ray. Or it can be used for more commercial things such as subliminal advertising. By lowering the power of the microwaves it can be used, instead of a voice in your head, a whisper into your subconscious. Another use may be to ward off birds because they are sensitive to microwave audio. High-tech scarecrow anyone?