Music would be really boring if it weren’t for musicians’ love for experimentation with effect units. These devices help them alter sounds in the most unique and creative ways. After taking a look at what effect units basically are and what they can do to music, I will list some of the favorite choices of James Hetfield, Richie Sambora, Jimi Hendrix, Kurt Cobain and The Edge.

Effect units are basically “electronic devices that alter how a musical instrument or other audio source sounds” (Wikipedia). Effect units can be used both with acoustic and electric instruments, and they can be utilized both at concerts and during studio recordings.

Different units affect sounds differently, when it comes to how the sound can be altered. Also the amount of change depends on the unit used. Some effect units are pedals (wah-wah), fuzzboxes, and reverbs. Effects can change the timing, dynamics, tone, frequency/pitch and feedback of the song. Many musicians choose to change more than one element to obtain unique sounds.

Fuzzboxes can be used along with any amplified instrument (such as electric bass, electric guitar, organ, harmonica, synthesizer, etc). Fuzzboxes are used to distort the sound. Wah-wah pedals, which were first manufactured in 1966, are used to change the sound so that it is more like a human’s. And last but not least, the function of “reverbs” is to keep echoes in the air, after the original sound is gone.

Of all effects units, pedals are especially a favorite for many guitarists. One of the most popular types of pedals is the stompbox. Stompboxes have a couple of effects available and they can be very conveniently controlled by the foot of the musician. Musicians also use rackmounts (racks consisting of different types of effects and they can be used to protect the equipment).

Musicians and their Sound Effects

From the first moment he burst into the music scene, Jimi Hendrix became famous for experimenting with effects, especially wailing feedback and pedals. He mainly used time delay, as well as stereophonic phasing. He used effects both during recording sessions and live performances.

The Edge, U2
U2s guitarist Edge is also famous for his use of time-delay effect during his guitar solos. Edge’s effect of choice is Korg SDD-3000. 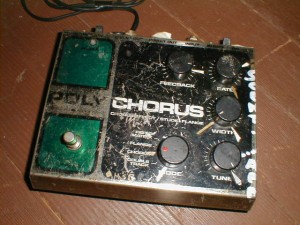 Image Via: The Kurt Cobain Equipment

James Hetfield, Metallica
Metallica frontman James Hetfield uses a pedal controller that enables him to switch between different pedals and amplifiers, which are protected in the rackmount. Some of the effects units Hetfield used during his concerts are of G-Major effects processor, Voodoo Lab Ground Control Pro floorboard and Voodoo Lab GCX Audio Switcher (x2), and Voodoo Lab Pedal Power 2 Plus.