Well, I’d say this is the first step in their nefarious plan to take over the world and enslave all the humans. Remember Honda’s ASIMO robot? Well it looks like the robot has been invited to be a guest conductor for the Detroit Symphony orchestra (which includes famous cellist Yo-Yo Ma.)

This is almost more interesting from a psychological perspective than from a technical one. Considering that symphony musicians can often be wary (to say the least) of unknown conductors, I wonder how these musicians feel about a robot conductor?

It seems like it was probably a pretty good publicity stunt (both for Honda and for the Symphony Orchestra) and is sort of cool to watch. ASIMO even took a nice bow at the end.

If you want to play robot conductor, you could always try conducting an orchestra on the Wii. Better yet, do it while wearing one of these for the full effect. 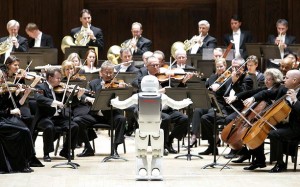 Honda has a YouTube channel with all sorts of other videos including one where ASIMO dances at the Kennedy Space Center.

I for one bow down to our new robot overlords!