Portland, Oregon, fall 2008. Club Satyricon, the revered punk venue which throughout its lengthy history has played host to some of the greatest alternative, punk and metal acts of the 80s and 90s, is currently getting down to a hybrid of hip-hop, electronica and inhuman screaming courtesy of BrokeNCYDE, four neon-clad young men whose excess of hair product is melting under the stage lights.

The Great Rock & Roll Swindle, Part 2 – Is BroNCYDE for real?

Not your thing? You might prefer the headlining band, the Millionaires — three Elvira-haired girls in their late teens singing songs with titles like “Talk S**t”, “I Like Money”, “Take Your Shirt Off” and “Just Got Paid Let’s Get Laid”. Classy!

The past decade has seen the emergence of many musical trends, some enduring (the rebirth of garage rock), some less so (glitch, anyone?) but none quite like the still-thriving “scene” boom of the late 00s, unique among the decade’s popular genres in that it was propelled to prominence entirely via the internet. Suddenly, any kid with layered hair and a Myspace/Buzznet/Stickam account (musical talent optional) could be a scene king or queen. 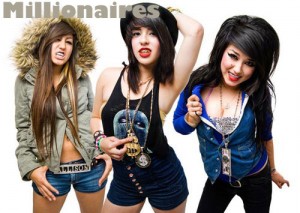 But not until BrokeNCYDE did the two varieties of music collide so spectacularly; their terrifying mission statement, “Get Crunk”, could be a bog-standard Dirty South jam except that instead of rapping, vocalist SE7EN screams the lyrics like he just got set on fire. An attempt to actually understand said lyrics, via Google, reveals them to contain such words of advice as “All you moth* f**k*n brizzles to get off the flizzle and to start f**k*n dizzles/Fishizzle my nizzle got these f**k*n brizzles all up in my mizzle like a f**k*n grizzle’. Dude, what? A slideshow on their Myspace page features pictures of fans, all of whom are female, attractive and very young, with the band’s name written on various parts of their anatomy. There’s even a Mothers Against BrokeNCYDE protest group, probably started after some lady saw her 13-year-old on the slideshow. Basically, they’re dreadful.

But are they actually serious? The title of their debut album, “I’m Not A Fan. . . But The Kids Like It!”, hints at a greater level of self-awareness than their lyrics suggest, and a further search identified several posts on help sites such as Yahoo! Answers wondering whether BrokeNCYDE is, in fact, a huge joke. Surely, casually misogynistic songs like “Scene Girls” and “S*x Toys” couldn’t have been written with an entirely straight face. 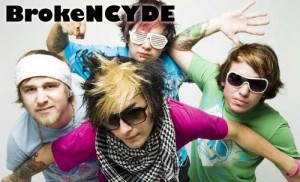 A closer look at Mothers Against BrokeNCYDE’s Myspace page shows that the offenders themselves are its number-one friend, followed by a squad of punk bands such as TSOL, Bad Religion and Flogging Molly and newer acts such as Bayside, Aiden and Hit The Lights. With the exception of the Adolescents, all of Mothers Against BrokenCYDE’s 24 top friends are bands which appeared on the 2009 Vans Warped Tour, from which BrokeNCYDE — depending on who you believe – were either ejected as a result of a petition by the group, or bailed to prepare for a tour of London.

The page’s founder is also identified as 34-year-old Massachusetts resident Irene Polito, about whom no other information can be found on the internet (the only Irene Polito from Massachusetts on Facebook graduated high school in 1983). The group’s original site, “mothersagainstbrokencyde.net”, no longer exists. Of course, the group and page may well be entirely legitimate, but as some of BrokeNCYDE’s fans have pointed out in the comments, it’s still excellent publicity for the band; if you tell the kids they can’t have something, they’ll probably want it even more.

So could it be that BrokeNCYDE is an elaborate joke at the expense of the music industry? An experiment in whether xXAshley AddictionXx and K3ls3y K4t4s7r0ph3 (sorry) are actually willing to drop $$$ on an album filled with unintelligible screams and questionable lyrics and basically devoid of any musical merit whatsoever, if it’s dressed up in all the scene-band trappings? If so, it’s a good one, albeit somewhat pointless.

But if it isn’t, and Se7en, Mikl and co. really do believe that “Sit down girl, just shut up and sit, before I make you s**k my. . . ‘ is as meaningful a lyric as they can write? Well, I pity the hordes of teenagers who blindly howl along to such sentiments at their shows, and the music critics who’ll have to work to come up with a new insult for every subsequent BrokeNCYDE release after their universal hatred of “I’m Not A Fan. . . “. Personally, after having to listen to their “music” several times during the writing of this article, all I can say is this: give me glitch, hipster metal or even Jeffree Star any day.