The mbl 101 X-Treme system, the most luxurious offering from German/American audio wizards mbl, costs US$250,000.00. Several reviews have mentioned that this is also the approximate price you could expect to pay for a Ferrari, which is indeed the case, that amount having been dropped by singer Chris Brown in 2008 on a vehicle for then-girlfriend Rihanna, and (presumably) by insurers in 2007 after “Undercover Brother” star Eddie Griffin introduced a $250,000 Enzo to a concrete wall during a charity race.

It could be said, then, that the 101X is the speaker world’s equivalent to that luxury automobile — its colour options even have expensive-sounding names like Ferrari Red [not to mention three different varieties of black.] Fortunately, unlike a Ferrari, the worst that could happen if your teenager decides to co-opt it is that it could be used to play some loud music. But is it really worthy of its price tag? 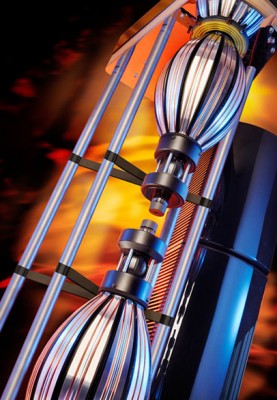 I have to start by saying that I have not actually experienced the 101X firsthand. One reason for this may be that it probably cost more than my house. Another may be that I’d need to knock down all the walls in that house if I ever decided to make the 101X a part of my life, because the system in its entirety weighs 3600 pounds and is not the sort of thing you can just pop in whatever space you have available. It’s big. Aesthetically, it’s also somewhat awkward. The main towers resemble some sort of steampunk torture device with their dual oval-shaped omnidirectional driver arrays supported by frames of acrylic, steel and wood; the two sleek woofer towers are all lacquer and metal, considerably more conventional in appearance. If it’s symmetrical, modern good looks you’re after, there are several other setups, such as Steinway Lyngdorf’s Model D, available for a similar price (or, if you feel like parting with $500,000, Moon Audio’s jaw-dropping Titan).

With its eccentric appearance out of the way, let’s move on to the technical side. The driver arrays are constructed using the Radialstrahler technology invented by mbl founder Wolfgang Meletzky, the maximum power of each one being 2200W. The frequency range of each driver array is between 24 Hz and 40,000 Hz, and each provides a sound pressure level of 82 Db/W/m. Throw in the fact that each of the woofer towers contains four 12-inch bass drivers, and you have serious sound. Which is another reason why the 101X needs more living space than most speakers; the average lounge room would be completely overwhelmed by the power produced by this thing. Full technical are found on the company’s website (UPDATE: now under construction). 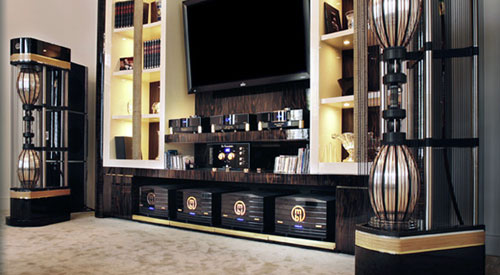 Opinions of its sound quality have been as positive as opinions of its appearance have been divided. In particular, I direct you to the review by The Absolute Sound’s Jonathan Valin, which not only describes the 101X’s performance but gives an in-depth step-by-step look at how it was assembled inside his house. Valin describes the system as being ‘far and away the best omnis I’ve ever heard, the best speakers MBL [sic] has ever made, and clearly “up there” high among the best transducers [lots of] money can buy.’ Which, coming from a reviewer of his experience, is high praise indeed.

Visitors to the various trade shows at which the 101X has been shown have also had good things to say about it, several describing it as the most amazing speaker they’d ever heard. HigherFi.com’s most expensive speakers gives it five stars out of six. The only complaints, as previously mentioned, have been about its bizarre look (Wired was particularly scathing), which admittedly isn’t for everyone.

This system is very much aimed toward people who have

And, all right, it does resemble a 19th-century sculptural tribute to garlic bulbs. But according to those who have had the pleasure of hearing it, it’s second to none in terms of providing an audio experience as rich and rewarding as if your musician of choice was playing right in front of you. And that’s the most important thing, isn’t it?