In my last article I wrote about the expensive speakers branded mbl 101 X-Treme , which, while by all accounts an awesome technical achievement and one of the best omni-directional loudspeakers out there, is somewhat — how can we say this — aesthetically challenging. Well, that’s not the case with Crystal Cable’s Arabesque. The latest offering from the Dutch-based company is absolutely gorgeous.

The Arabesque retails for $65,000 USD, meaning that unfortunately (as with the 101X, which makes it look positively cheap at $250,000) you are probably unlikely to ever own it unless you also own, say, a sports team, movie studio or racing stable. But it’s just as desirable as any of those things; comprising two completely transparent glass towers in which an industrial-chic steel tweeter and a trio of sleek, modernistic black and silver 6.5″ woofers are embedded, it’s a breathtaking design achievement. 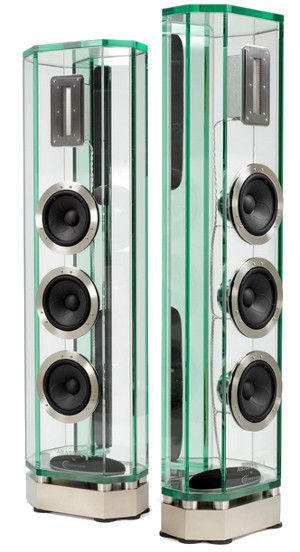 In order to prevent distortion, the towers are constructed so that no surface is parallel, so what at first appears to be a rectangle is in fact a twelve-sided comma shape. It’s less monumental than the 101X, standing 55.7″ in height and weighing 227 pounds.

Like I did in my last review, I have to point out that I’m not writing about the Arabesque from firsthand experience. Even if it didn’t cost as much as my car and two of its siblings, it would seem like an insult to plant it among my ancient lounge furniture. Because, no matter what the sound quality, the system’s big selling point is its appearance. But Crystal Cable president Gabi van der Kley has stated that if it didn’t sound as good as it looks, she would consider it a failure. So let’s take a look at the technical aspect.

The Arabesque is a two-way speaker, the woofers connected by Crystal Cable’s Dreamline wire, and has a frequency response of 27Hz-101Khz, +/- 3dB, a sensitivity of 95dB and an impedance of 4 Ohms. According to online reviews, these figures add up to an unrivaled level of clarity, with both ultraaudio.com and avguide.com concluding that the only area in which it falls slightly short is the impact of the bass. That didn’t stop them from describing it as “the best-sounding speaker I’ve had in my room” and “look[ing] remarkable and sound[ing] remarkable” so it would appear that the Arabesque does indeed sound as good as it looks.

It should also be noted that the Arabesque is Crystal Cable’s first attempt at a speaker (look at the company’s name and see if you can guess what it normally manufactures). So it’s obvious that they have made an outstanding debut, continuing the revival of sorts in glass speakers led by France’s Waterfall Audio, whose equally striking Iguascu has also garnered critical praise except for a slight lack of definition in the bass department. While it’s unlikely that Crystal Cable will be able to top this achievement in the near future, the Arabesque ensures that the respect afforded to their name in the cable market could easily extend to the wildly competitive word of loudspeakers. 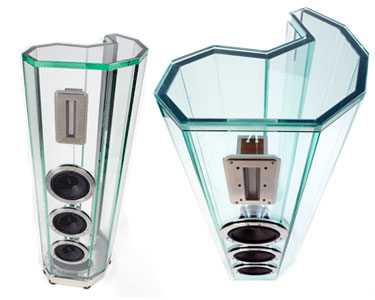