It was once thought that the earliest recording of the human voice was made by Thomas Edison in 1877, when he recorded Mary had a Little Lamb on his new invention – the phonograph.

BUT, a new recording has turned up. It was made on April 9, 1860 and it is of a woman singing the French folk song “Claire de la lune”. It has now been heard for the first time in 150 years.

You can hear the recording here in mp3 format. Don’t expect Dark side of the Moon production here – remember, we’re talking first recordings ever made.

The interesting thing is that the recording was never intended to be played back – or at least the technology to play it back was never imagined at the time.

It was recorded by a “phonautograph”, which etches waveforms onto paper. French inventor Edouard-Leon Scott de Martinville built the device, which uses a diaphragm that responds to sound to etch the lines onto paper via the soot from an oil lamp.

Scientists have managed to play back the recording using a virtual “stylus”, which is really a computer program that reads the recording from a scanned image. The process sort of reminds me of this extremely interesting technique. 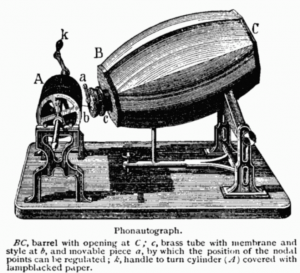 A group of audio historians called “First Sounds ” have been working as archiving early recordings and worked with Paresian Mr. Giovanni, who retreived the sounds from the paper at the Lawrence Berkeley National Laboratory (LBNL) in California.

As the phonautograph was a manually-cranked device (no, they didn’t have crystal timing then!), the speed varied throughout the recording and likewise the pitch changes somewhat over time, giving it a bit of a warbly sound.

The oldest sound ever recorded (also on the phonautograph) is here. It’s one of the early “beta tests” of the unit, and yielded a garbled mess. 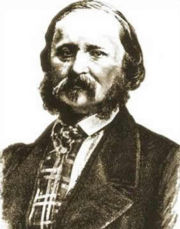 The oldest recognizable sound ever recorded was that of a tuning fork at 435Hz on the phonautograph. Presented here in various stages of restoration.

If you’re into vintage recordings and the history of it all, this is an amazing DVD – definitely check it out.