I have had all I can take of mp3’s at 128kbs. What a way to destroy an audio signal. Which clip sounds better? The sound is nearly identical because that [mp3] recording has no “HIGHS”! Take any mp3 recording and restore the highs on the parametric equalizer and you will hear the outrageous “flanging”. If you start with a high end recording that is properly processed with 50% dynamics & 50% compression and the highs completely restored. Then take that recording put it on a wave file. Then convert it to the mp3’s 128kbs and do a comparison […]! I can guarantee you this–once you [hear] a pristine HD recording and compare it to a MP3 at 128 kbs you will never listen to it again. Distortion is ugly and the mp3 device makers know it and that is why they chop off the highs on the sound spectrum so you don’t hear it. That recording you have above is flat as a pancake, with no compression, proper sound spacing (compression/dynamics) and proper equalization. 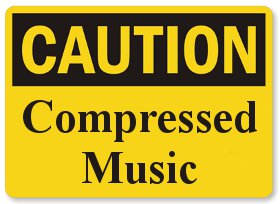 I could not figure out for the life of me why any device that plays a compressed format like an mp3 at 128 could ever get popular. The reason is now obvious. The people using it have no idea what good music sounds like. They are absolutely clueless [!!!]

It is a fact that back in the 1970’s we had much better sound quality than anything being put out by ipods etc. One thing radio stations were not doing back then was broadcasting distorted music. Not only that but we had quality amplifiers and receivers, tape decks, turn tables and speakers to maximize the sound fidelity. Pioneer, Kenwood, Bose etc. I don’t care if you can fit a quadrillion songs on an Ipod. The most important factor is always the
quality of the music.

I have recently taken some digital recordings of Olivia Newton John and converted them to HD using the Audio Cyclotron. It has 6 times the quality output of any mp3 at 128 kbs and if you wanted to make an Mp3 version of that HD recording without substantial sound loss you could not do it with less than 320 kbs. So there you have it!

First you must identify what good sound is so you have something to measure it by when you convert it. You can’t use a trashy recording with the highs chopped of and do a 128/320 kbs comparison and hear the difference.

I’ve noticed that some internet radio stations have tried the trick of trying to take the mp3 at 128kbs–restore the highs and then repackage it as HD. Sorry that stunt won’t work either. That is a deception! People must like deceptions cause they sure don’t know when they have been taken. Bottom line here is (music wise) is the dumbing down of the music industry. The mp3 at 128kbs is nothing but a mediocre substandard compression format.

Lastly — I have spent hundreds of hours doing tests with HD music and conversion formats and I have noticed something amazing [!!!] I have been able to make a wave file smaller than an mp3 at 128kbs by changing the codec to mpeg layer 3 and 16 bits 44htz stereo and sound identical to the original wave file. Some of the music files were only 3 megabytes. Try to do that with an mp3 recorder!

Contributed by Kenn in response to Do 320kbps mp3 files really sound better?