OK, so you’re on a long road trip, you’ve played the entire playlist in your ipod all the way through four times already and you never splurged for satellite radio. What are you supposed to listen to?

Well, if you’re travelling in Japan (see below for California update) all you need to do is go for a jaunt down one of the “melody roads”. A team from the Hokkaido Industrial Research Institute has built a number of musical roads in Japan that use your car’s tires to produce music.

The patent-applied-for concept works by using grooves cut at very specific intervals in the road surface. Just as travelling over small speed bumps or road markings can emit a rumbling tone throughout a vehicle, the melody road uses the spaces between to create musical notes. 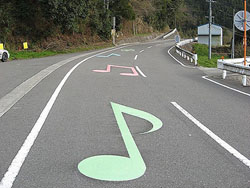 Grooves are carved into the road between 6 and 12mm apart – The closer the grooves are, the higher pitched the sound. Apparently, the plan was to carve melodies into the roads that have some significance to the locality.

The system was the brainchild of Shizuo Shinoda, who accidentally scraped some markings into a road with a bulldozer before driving over them and realizing that he could produce a variety of tones by varying the spacing between the grooves.

There are three different melody roads in central and northern Japan – in Hokkaido, Wakayama and Gunma. They all play different tunes, with one of them playing the melody of a Japanese pop song. Here is a sample of what the melody road sounds like: 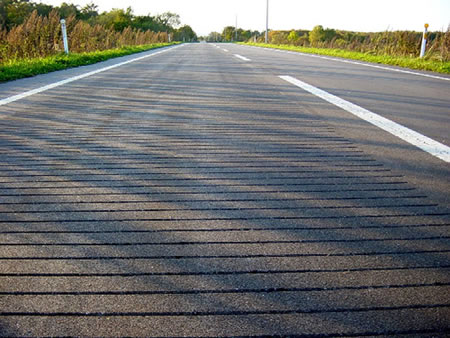 Roads are marked by colored musical notes painted on the surface of the road, which alert motorists of the impending musical interlude.

Unfortunately, you have to be going at a fairly slow speed (28mph) to get the effect at its optimum, and you need to keep the wondows closed to get the best sound. Driving too fast will sound like the song is playing fast forward, while driving around 12mph has a slow motion effect which can almost make you car sick.

Update:
There USED to be a musical road in California – it was built by Honda as a publicity stunt. Unfortunately, Lancaster, CA residents complained that it drove them crazy because they could hear it constantly (the Lone Ranger theme), so they recently paved over it September 23, 2008.

Update (Oct 7,2010):
The Lancaster musical road still exist but now it is on Avenue G and 30th west just north of the freeway in the fast lane.

Here’s a video of the original road.