This is not going to be your normal, run-of-the-mill remix contest.

Background: Around 10 years ago, two Russian artists named Komar and Melamid paid to hire a market research firm to find out the American public’s likes and dislikes in art. They wanted to know what works, but moreover they wanted to know what doesn’t work. They began with visual art, and then moved on to music. As it says on their website:

In an age where opinion polls and market research invade almost every aspect of our “democratic/consumer” society (with the notable exception of art), Komar and Melamid’s project poses relevant questions that an art-interested public, and society in general often fail to ask: What would art look like if it were to please the greatest number of people? Or conversely: What kind of culture is produced by a society that lives and governs itself by opinion polls? 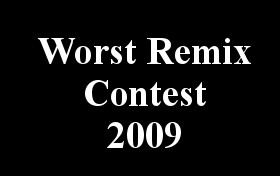 They took all the data that was gathered, compiled it and used it to try and create the most annoying song possible based on the market research. Of course they also created the most likeable song as well, but I sometimes feel that evil can be much more entertaining that good, so we’ll focus on the “most annoying” song for now.

It would have been much too easy to simply create a cacophony of dissonance to make the worst song in the world, but they didn’t take the easy way out. The song is actually well-crafted as far as song structure and creativity are concerned. Here is their description of what they came up with for the worst music in the world:

The most unwanted music is over 25 minutes long, veers wildly between loud and quiet sections, between fast and slow tempos, and features timbres of extremely high and low pitch, with each dichotomy presented in abrupt transition. The most unwanted orchestra was determined to be large, and features the accordion and bagpipe (which tie at 13% as the most unwanted instrument), banjo, flute, tuba, harp, organ, synthesizer (the only instrument that appears in both the most wanted and most unwanted ensembles). An operatic soprano raps and sings atonal music, advertising jingles, political slogans, and “elevator” music, and a children’s choir sings jingles and holiday songs. The most unwanted subjects for lyrics are cowboys and holidays, and the most unwanted listening circumstances are involuntary exposure to commercials and elevator music. Therefore, it can be shown that if there is no co-variance someone who dislikes bagpipes is as likely to hate elevator music as someone who despises the organ, for example fewer than 200 individuals of the world’s total population would enjoy this piece.

The cowboy-soprano-rap at the beginning is a good indicator of what is to follow. The bass is provided by a tuba and there are some great bagpipe breaks.

Yo, I’m ropin’ up my saddle for the long long ride
Every time I see the desert there’s something inside says
Yo, yo, this is the life
Give me open land and a big ol’ knife
To get some bear, deer, even a snake
I light me a fire, do the shake and bake
I say yo, yo, I’m a cowboy now.

Here is a downloadable MP3 of the song – it’s pretty large at 30MB. (the “most likeable song” is here, which is of course much shorter). Personally, I think that the most likeable song sounds just as horrible as the most annoying song. Go figure.

You can get the full CD on Amazon.

On to the contest

Let’s make gold out of guano. Whomever can come up with the best remix of the “most annoying” song will get a really cool prize. I’m not saying what the prize is quite yet prizes have been announced! Over $1000.00 in prizes have accumulated and more being added!

Of course you will also get all the fame and notoriety that you would expect from being featured on our site.

Send us your remix before April 1st to: remix (at) noiseaddicts.com. All the entries will be posted here on the website, and judging will be begin on April 1. (You can also remix the “most likeable” song as well and I will post them, but they will not be eligible for the contest.)

Preference will be given to remixes that:

Sign up for email alerts to be notified of when judging begins and when remixes are posted!