You’ve got to dig to dig it, you dig?

So now, robots can do something mere mortals can’t improvise. Shimon the Jazz playing robot, can listen and improvise to any musician, not in any spectacularly impressive manner, but it can capture the tone structure, a basic idea of the artists composition, and work on it from there.

To get started, Shimon was programmed to master the technique of Thelonius Monk, the guy who invented Bebop and improvisational jazz. It’s within this model that Shimon works, and actually accompanied a pianist, Guy Hoffman on the Marimba, in a live stage performance, back in April. 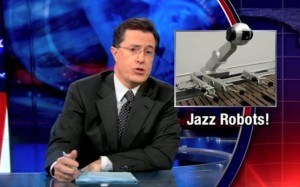 Shimon, which is Hebrew for “He has Heard” , lives up to its name, quite literally. Gil Weinberg, Shimon’s creator and owner of Georgia Tech, whose company makes the app they used in video below (just gotta love the head bob!), says the effort was made to make people appreciate music more. Shimon hears what a musician plays, and then works out a piece of its own, or maybe just accompany the musician to a beat, whenever possible.

The algorithms which lie behind Shimon are complex, but based on probabilities determined by statistical models like, Hidden Markov Models (PDF File). Basically it means, Shimon studies the way a musician plays, and then works out the possibility of the next note. This helps him change the tempo or the structure any way he.I mean it wants.

Recently, in a performance billed as the first intercontinental musical interplay of its kind, people from Japan (that’s new. usually it’s the Japanese with the robots) performed little compositions on their iPhones, using ZooZbeat, and Shimon jammed right with them on the marimba, from its home in Georgia.

Though this huge leap in AI has to be appreciated, Shimon seems to be relying on mathematical models a bit too much, not true improvisation. It’s definitely no match for the sheer unpredictability of the human senses. Don’t expect Shimon to start playing exactly like Thelonius, yet.

So is the musical apocalypse upon us? Are musicians, already suffering from the crushing loss of royalties, now have to compete with a musician who isn’t even human, and can probably churn out more albums each year? Well, not now . . . maybe 20 years later.