So there’s this dude, right. He heads up a project called Vendetta Against. I don’t know his real name. He professes an admiration for the talents of Miley Cyrus that may not be entirely sincere, has previously released music under another name, and keeps a sarcastic and informative blog about the recording/distributing process for Vendetta Against’s debut EP, “Shifty Eyes” (Tasty Treat Records). Oh yeah, and he types really well.

Usually, when I write a review, I do so with at least some prior knowledge of the band in question. Not so with Vendetta Against. Aside from the above snippets provided by its various online presences, the only other things I know are that the artist hails from Brookings, SD, and that the solitary fan (currently) of Vendetta Against’s Facebook page appears to have “become a fan” of anything whose name contains the word “vendetta” (and who might like to talk to someone about that). 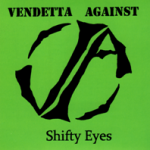 “Shifty Eyes” comprises four songs of acoustic punk, the first of which, “Gekko Rides Again” , references “Wall Street” and its main character to describe the blame-passing within the financial industry. Vocally, there are similarities to Against Me!’s Tom Gabel – by which I mean “they really do sound quite alike” , as opposed to “Against Me! is the folk-punk band everyone’s heard of so I’m just going to go ahead and compare them.” And it’s an admirable message, but it would have benefited from some of the tunefulness of the following two tracks (no song can survive on a message alone, no matter how admirable), like “No Time To Lose” , which powers along like the Violent Femmes covering Rancid’s “Bloodclot” until you realize you’re headbanging to a drumless acoustic guitar riff. And enjoying it.

I almost feel like it belittles the intent of the EP to call its songs “catchy” , but damn it, “No Time To Lose” and the song that follows it, “What I’m Grateful To Forget” , are catchy. I don’t even remember what the latter’s lyrics are about, because I was too busy thinking about how the chords bring to mind both Husker Du’s “Never Talking To You Again” and Doughboys’ “Sunflower Honey” . Both of which I love, so we’re cool.

The closer, “Fallout Crunchies” , is slightly slower than its predecessors, urging the listener to ‘Get your politics from cartoons and celebrities, always heed the words of TV personalities’. The whole EP clocks in at ten minutes and three seconds, adhering to punk’s short-and-sharp aesthetic, and, whilst a couple of unflattering reviews have been posted on the band’s blog (accusing it of such transgressions as sounding indistinct from the music of other similar singer-songwriters, being lyrically insubstantial and jacking a chord progression from Guns N’ Roses), it really does start to grow on you after a few listens — especially the second and third tracks – and is definitely worth checking out for fans of the acoustic punk sub-genre.