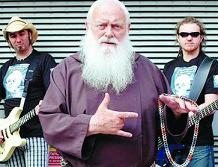 Brother Cesare Bonizzi is a Capuchin Monk who was born in 1946 in Italy. He has always used music as a way of spiritual meditation, but one day he saw Metallica in concert and he was changed forever.

He formed a band called “Fratello Metallo” (“Metal Brother”), a heavy metal band saying that “Metal is the most energetic, vital, deep and true musical language that I know.”

Like any good Metal God, he sings about booze, smoking and sex, but he also covers spirituality and God as well. The band has developed quite a following, and have released several albums. They have even played at the “Gods of Metal” festival in Italy with Iron Maiden.

Bonizzi performs in full Franciscan habit. Although people often get a little excited when the mistake him making the “metal devil horns” in concert, he is actually extending his thumb along with the index and pinkie, which is actually the sign for “love” in sign language.

Here’s the video of the Heavy Metal Monk