As Johnny Rotten said in 1978, at the end of the final Sex Pistols concert before the untimely end of bandmate Sid Vicious:

Ever get the feeling you’ve been cheated?

This article has nothing to do with the Pistols, except that its title was borrowed from their 1980 film and it relates to an artist whose music and image, like theirs, were carefully manufactured despite giving every appearance to the contrary. Up until December 2009, Michigan’s Andrew Wilkes-Krier (aka Andrew WK) was best known for the iconic cover of his 2002 album “I Get Wet”, which depicted WK’s face with a stream of blood running from the nose, and the uncomplicated party-hard anthems such as, well, “Party Hard”, contained therein. 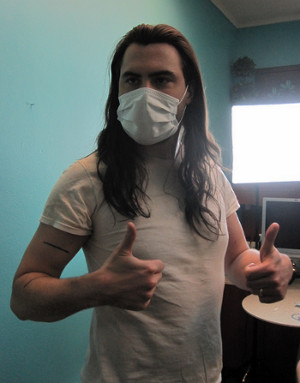 Apparently, it wasn’t so uncomplicated after all. After being accused of being a record-company creation since that album’s release, in December WK admitted at London nightclub Madame Jojo’s that the Andrew WK persona had in fact been created by a committee, including himself and his father, ‘in the spirit of commerce — (and) entertainment’. Stranger still, he went on to say that he was the second performer to play the part (the original having peaced out some time after “I Get Wet” .)

Rumour originally had it that this one-man Menudo was the brainchild of someone called Steev Mike, who was listed as executive producer of “I Get Wet” and WK’s 2006 album “Close Calls With Brick Walls”, as well as receiving credit on a DVD, “Who Knows” , also released by WK in 2006. According to the Andrew W.K. & Steev Mike Information page, whilst performing in Elizabeth, New Jersey, on 18 December 2004, WK abruptly left the stage for no apparent reason and failed to return. The site alleges that audience members and security staff identified the person onstage as an impostor.

In November 2004, a person calling themselves Steev Mike accused WK on multiple web sites of lying to the public. Other sites relating to WK were allegedly hacked during the same period, a series of coded messages appearing (‘NOW ITS TIME FOR STEEV MIKE — AND THEN HE LEFT.’) More sites dedicated to the mystery have since appeared, one of which theorizes that WK could in fact be a creation of Foo Fighters frontman Dave Grohl. The Andrew W.K. & Steev Mike Information Page also mentions another theory, that the persona was created by Grammy-winning songwriter Diane Warren to fulfill her desire to write a rock album and manage someone’s career.

Following the release of “Close Calls. . .” , WK formed his own record label in February 2009, worked as a producer for acts such as Lee “Scratch” Perry and the Sightings, and recorded a massively popular ringtone for Universal Music Japan. In May 2009, he addressed the Steev Mike rumors, saying that “most of what you’ve heard is greatly exaggerated but the parts that are true may be more disturbing than you’d hoped.”

Fast forward to Madame Jojo’s and his startling admission, and I’m trying to decide whether I do, in fact, get the feeling I’ve been cheated.

Admittedly, I haven’t listened to a great deal of WK’s music (when “I Get Wet” was released I was more into Jimmy Eat World and Black Rebel Motorcycle Club), but I recall his first few singles, and the image they provided of their singer as a simple guy who just wanted to have fun and get wasted. The kind of dude you’d like to party with. But if I’d been a devoted fan, would my mind be changed by the revelation that that persona was a corporate creation, its every move planned by record executives to generate the maximum amount of money possible?

To which my answer is, I honestly don’t know. On one hand, people don’t generally take kindly to being manipulated, even “in the spirit of entertainment” . Whether or not WK, who on the same night stated that he “thought it would be more interesting if [his] secret history was revealed after the fact rather than as a precursor”, was directed to reveal the truth or simply became tired of maintaining the pretense is unknown. It also remains to be seen how the news affects WK’s subsequent career in the music industry, his career as a motivational speaker or the successful Manhattan club, Santos Party House, which he launched in 2008; of course, that’s if all these ventures were undertaken by the same Andrew WK. Who knows?

But then again, it is an interesting story and has more than likely assured WK a place in rock history, one that he may not have attained had he been nothing but the purveyor of good-time party-metal he initially claimed to be. And, as someone who wasn’t a dedicated fan, if I did find myself listening to his music again I think I’d be able to separate it from all the intrigue and enjoy it for itself (after all, some of the best musicians enjoyed distinctly shady private lives). So really, I don’t know what to think about Andrew WK, and am thoroughly confused.

Which is probably exactly what he — or whoever — intended.