David Hanawalt, Architect and Bill Close have built a house on a beach in Lake Michigan that is built to be a large musical experience that you can live in.

The instruments that make up the house are based around strings. The house is the bridge and resonator for a number of giant stringed instruments. Bill Close had to develop new technology for the “strings” of the instrument to accomodate the very long scale lengths.

Not only is the house a giant interactive musical instrument, but the lines of the strings also make up part of the striking architechtural design.

Because the strings are so long, you can’t just run up to them and start strumming – you must first put on a cotton glove covered in rosin. This keeps your oily fingers from gumming up the strings. You then use 2 fingers to lightly pinch the string, and then you run along the length of the string. This action creates a compression wave within the material of the string, similar to how you produce a tone by running your fingers around the edge of a glass. 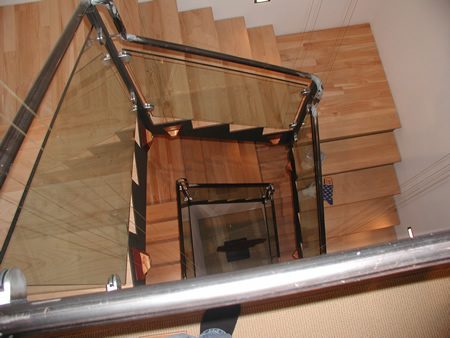 They have made some videos of the house. (UPDATE: video location no longer valid)

The stair well is incredible – strings start from the base of each stair and run vertically to the skylight some twenty feet above the base stair. The strings rise in pitch as one ascends the stair well. A player on the bottom of the stairwell plays the low notes while a player up on the third floor part of the stairs plays the higher notes. Tones reverberate through out the stair well in a unique form of musical communication.

Massive beams forty feet in length form the core of the ‘instruments’. The strings run from musical bridges that are accessible on the second floor and run out through specially designed gaps in a low wall and out over the Main room in the house.