Thomas Edison (or his students, one really never knows with him) worked on the carbon microphone in 1876. Since then, microphone technology has come a heck of a long way, from liquid microphones that rendered speech so you could actually understand it (early mics couldn’t render speech intelligibly), to condenser mics used for studio recordings and scientific recordings.

We’ve also got digital mics, silicon mics on a chip, parabolic microphones for spies and eavesdroppers, ribbon microphones, laser mics, electret condenser microphones, lavalier microphones that clip onto clothing for interviews and even speakers are sometimes used for mics in intercoms and walkie talkies (and by creative sound engineers ). We’ve come a long way. 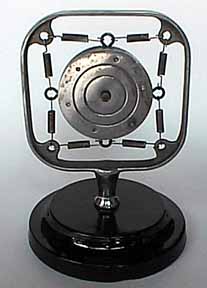 This mic, which was developed a few years ago but hasn’t been available commercially until recently, isn’t the only high-sensitivity mic out there, but the great thing about this microphone is that it uses a tiny pin to detect vibration on a surface, therefore sound in the air is not picked up by the microphone. This allows very faint sounds to be amplified a great deal with little ambient noise.

Of course this little microphone may not necessarily be the absolute most sensitive microphone in the world – that prize arguably goes to these huge concrete behemouths .

Sanken also make an interesting new microphone that they describe a a perfect omni-directional condenser microphone, claimed to be the first microphone that displays a perfectly circular polar pattern at up to 20kHz. Presumably this type of mic would be of great interest to engineers who record orchestral music

How much is it going to set you back to buy a mic that you can practically use to record yourself thinking? Around $4000. 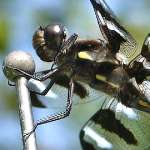 While at that price they aren’t going to be flying off the shelves, it’s still a lot less than other professional quality setups like the “Neumann Solution D Large Diaphragm Studio Microphone with 96kHz A/D Converter” which will set you back a cool $13,200.

this one. There is also a portable version of the microphone.

A rock star insect singing into a mic? (right)

The mic is really cool, but I’d like to point out one thing: I tried to contact Sanken to find out more about the microphone and its applications, however my polite inquiries were treated with a bit of a rude refusal to answer any questions. In fact, they refused to even confirm that the video above actually uses their mics. I cannot fathom how this approach to inquiries leads to success in business, but heck, what do I know?