Delia Derbyshire is the composer of the original theme music to the cult favorite TV show Dr. Who. She worked for the BBC’s Radiophonic Workshop in 1963 and was asked to record the theme written by a composer named Ron Grainer. She turned this composition into a ground breaking (at the time) electronic masterpiece.

Delia passed away in 2001 and recently it’s been revealed that a huge archive of 267 tapes of previously recorded material were discovered in her attic, laying dormant for over 30 years.

This hidden horde of music includes some groundbreaking work, including a very modern sounding techno track recorded in the late 60’s that could easily just have been released on Warp Records.

Paul Hartnoll (former member of the electronic group Orbital) said the track was, “quite amazing”. Near the beginning of the track, you can hear Delia’s voice saying “Forget about this, it’s for interest only”.

Here are some other samples:
A recording of her voice, playing forwards and backwards from a documentary about the Tuareg people on the Sahara

A soliloquy from Hamlet set to strange science fiction swooshes.

Ms Derbyshire did most of this music BEFORE synthesizers came along. 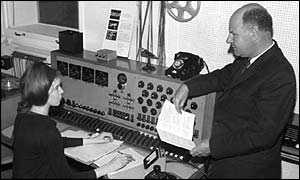 Ms Derbyshire was known for using found objects such as a green metal lampshade as musical instruments and said she took some of her inspiration from the sound of air raid sirens, which she heard growing up in Coventry in the Second World War.

“The next thing that we want to do is make the archive available to everyone who wants to hear it,” says David Butler, of Manchester University’s School of Arts. “But also this has to be a living, breathing archive so we are going to commission new works as well.”

The sound effects on the Dr Who show were widely regarded as groundbreaking. Here is a collection of videos describing how 4 famous sounds were made.

Unfortunately we have also recently lost another pioneer of electronic music and sounds from the BBC, Daphne Oram. She was arguably one of the pioneers of techno and electronic music.