I remember a very long time ago when I owned a TRS-80 color computer with 4k (!) of RAM made by Radio Shack and I bought the synthesizer cartridge for it. It was so much fun just tweaking the filter and other parameters.

Of course computer synthesis has come long way since those days, but ever since I saw the first iPhone, I thought back to this little TRS-80 program and wondered about how cool it would be to have a synthesizer on the iPhone.

A few music making apps have been made available lately including Beatmaker which is essentially a music arranger with a mini-sequencer, sampler, and drum machine. There is also an app called iPhone Synth , but it is a very basic synthesizer with few adjustable parameters and it isn’t available as an official iTunes app. Up until now, no “official” full-featured synthesizers.

Now, Noise.IO is soon-to-be releasing an FM-based, first ever fairly full-featured synthesizer app for the iPhone that includes gestural adjustment of parameters. Yes, turn your iPhone & it changes the sound!

(By the way, if you want to try to develop your own iPhone apps, this is the book to get)

Not only that, but it’s got a great interface, multitouch capability and sounds fantastic!

The new synth app is slated to become available August 25 at the App Store and will cost $6.99. The website does have some “ugly beta screenshots”, but NoiseAddicts has the worldwide scoop on the first video of the new synth. Note that this is a really rough demo that they put together especially for us. We will update this page as new demos are create, as there are new ones forthcoming. 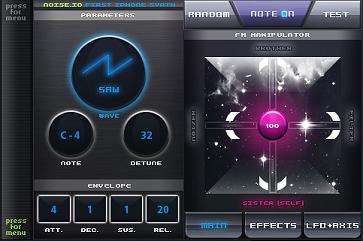 This amazing little synthesizer uses “ESFM technology – Enhanced Subspace Frequency Modulation. It’s an improved version of FM which has been developed especially for iPhone, the architecture has been redesigned to allow maximum user-friendly approach to creating new sounds.”

If you want to use the app, but don’t have an iPhone, the developers will be releasing a VST version of the app for use on a computer near the end of this year.

Here’s what the developer says about the ESFM technology:

ESFM is the new approach to Frequency Modulation method (which is best suited for making noise-based sounds and sound effects) which allows editing presets in a very evident manner. Currently there are four operators that comprise the sound: Brother, Sister (waveform oscillators), Noizer (multiband noise oscillator), Filter (active multifilter module). All the operators can modulate (modify the nature of) themselves or another operator in a static or dynamic (via LFO or user’s gestures / accelerometer) ratio, this allows to create an immerse range of sounds.

At this stage, Noise.io is not intended to be polyphonic. The work chain looks like this: you fire up the Control Surface, and start sliding your fingers across the iPhone screen (just like in Korg Kaosspad or Kaossilator). Sounds are generally huge and massive, contain post-FX (especially my favorite “space swooshes”) and introducing polyphony seriously affects performance which is not acceptable for us.

Sounds cool – I’m really excited about the fact that it’s not just another “me-too” analogue synth emulator, and it seems as though it really will be able to create some truly unique sounds. iPhone app or not, it looks like a really cool synth!

We have been promised the very first copy of the synth app, so we hope to provide a full, in-depth review soon (subscribe to our RSS feed for updates.)