This is pretty interesting – Youtube, Carnegie Hall and the renowned Composer Tan Dun (Crouching Tiger, Hidden Dragon) have teamed up to create an online, virtual musical YouTube orchestra. Participants are invited to learn one or more of a piece specially written for the contest, and play along with a virtual conductor video which is complete with timing information. They then record their audition and upload it to compete.

The winning entries will all be combined into a virtual performance and released on Youtube. Winning contestants (judged by a panel and by YouTube users) will then be invited to play the piece in old-school fashion (ie live) at Carnegie Hall at the “YouTube Symphony Summit” under the direction of Michael Tilson Thomas. 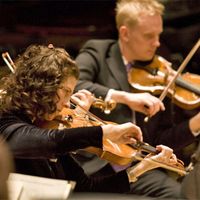 I’m sure it’s going to be extremely competitive (the classcal world is insane as far as that goes), but I can’t imagine how tough that mixing job is going to be with a different recording envoronment for every intrument and possibly strange timing problems. Kudos to whomever decided that they would take on that task.

Here is more information on the contest. (UPDATE: contest is over) The deadline for all video submissions is January 28, 2009.