Pop, crackle, hiss. No, this isn’t the sound of the new b-grade Rice Crispies.

The music-buying public, deeply enamored with digital downloads, is abandoning the compact disc in droves, but one physical medium is staging a tiny comeback. Amid otherwise gloomy music sales numbers released by Nielsen this week, vinyl record sales doubled compared with the year before.

In 2008, 1.88 million vinyl albums were purchased, more than in any other year since Nielsen SoundScan began tracking sales in 1991. The previous record was in 2000, when 1.5 million LP albums were sold.

Much of this was due to increased sales at independent record stores – more than two out of every three vinyl albums bought in 2008 were purchased at an independent music store. 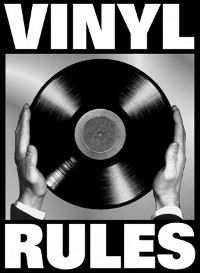 In 2008, Radiohead claimed top spot in the vinyl realm, both as an artist and for one of its albums. They sold 61,200 vinyl albums during the year, of which 25,800 were its In Rainbows album.

It seems as though people are gravitating towards the aesthetic value of an actual record. I for one enjoy a record’s album graphics and liner notes, but most of all I like being able to hold something in my hand that feels as though it has some sort of physical connection with the artist.

A lot of people still talk about how records sound more accurate than CD’s, attributing this as of the reasons for vinyl’s resurgence. I think this is bull. First of all, people don’t care about sound quality as much as they used to – most music is listened to in MP3 format on $1.99 ear buds through a 50 cent amplifier in an iPod. Second, vinyl is not more accurate, not even close. Yes, it sounds different than CD’s – that’s because of all the distortion due to the massive eq curve that must be applied to the music before it’s put on vinyl (vinyl can’t deal with the extreme bass or treble), which is then reversed when amplified. Of course the stylus and the physical medium itself create a lot of distortion themselves.

I could also talk about how the mix engineer isn’t referencing the mix on vinyl. This means that listening to the music on CD format is the closest way to hear how the song was actually intended to be heard. I do, however like the sound of vinyl – it sounds warm, but airy. For some music, it imparts a great organic sound (this is the distortion that we hear) that I enjoy, and it might sound better in some respects, but in no way does it sound more accurate. Of course many mix engineers are applying plugins that mimic the sound of vinyl (or tape) to the music already. 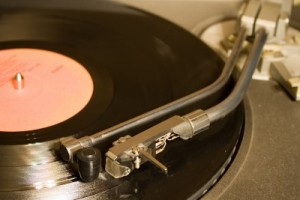 In any case, this is a post about the vinyl industry, not a rant about misinformation about vinyl. It is indeed a happy story as far as I’m concerned because the less virtual music becomes, the more we will actually care about it. I’d think nothing of deleting crappy music from my hard drive, but I’d never throw away a record.

Now, before we all throw out our iPods and go out and buy the latest Sears console record players, lets just put this into perspective: The top-selling *digital* song for 2008 was “Bleeding Love” from Leona Lewis, with 3.4 million units sold (compared with 25,800 for the vinyl of In Rainbows) , while Rihanna was the top-selling digital artist, with 9.9 million units sold (compared to 61,200 for Radiohead’s vinyl records).

Even so, this still isn’t going to make me go and sell my vinyl collection.