Our “Featured Band” series is meant to introduce you to fantastic music that you might not yet have heard. Rarely has an “unknown band” had such a tremendous impact on me as these guys, so everyone – meet Cymande!

Cymande came to being in 1971 in London, England, formed mainly by musicians from Jamaica and Guyana. In their 3 short years together they created some incredibly soulful music, and were one of the more sophisticated funk bands of the early 70’s.

That being said, to call them “just a funk band” is doing them a stellar disservice. They combined groove, funk, African music and percussion, calypso, reggae-type Rasta lyrics, Santana-esque rhythms and minimal arrangements into a superbly distinctive, complex and eclectic mix. 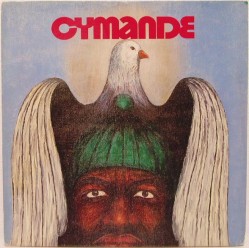 What is even more amazing is that all eight musicians were completely self-taught (although I guess Jimi Hendix was self-taught as well.)

Cymande (pronounced “Suh-mun-day”) is derived from a Calypso word for Dove, which symbolizes peace and love, and their music reflects this notion.

There were a lot of bands in the 70’s that conveyed an uplifting message and Cymande did this with aplomb. Their logo, the spread-winged dove over the head of and all-wise Rastaman, a shepard teacher who espouses love, peace and positive messages on living, was the image on the cover of their first album.

You’d swear that the track “Brothers on the Slide” was produced by Curtis Mayfield.

Cymande was discovered quite by accident by producer John Schroeder in a London bar where they were rehearsing. He was there to see a rock band but the gig had been canceled, so he stuck around to see the band that was rehearsing. He immediately signed them and recorded their initial single “The Message.” The track reached number 20 on the US R&B and Pop charts.

After the success of their first album in England, they decided to tour the US with Al Green. They played a few important venues, including The Apollo, and also played a gig on Soul Train. 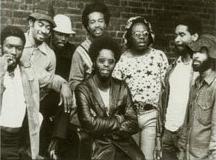 Unfortunately their album, “Promised Heights” which was the culmination of their chilled funk/jazz sound wasn’t released in the USA (Where they were most successful). This album had their some of their best tracks that became staples of the new Rare Groove/Deep House scene which developed in London and New York during the eighties.

They disbanded shortly thereafter except for a reunion gig in Brighton in 2006. Since then, they’ve been sampled by De La Soul, The Fugees and some of the the godfathers of hip-hop like Kool Herc and Grandmaster Flash. Here they are in 2006 with Jimmy Lindsay.

Cymande really is one of the forgotten miracles of the 1970s and deserves a major rediscovery by fans of all musical genres.

“The Message” is a double CD with tons of great tracks and I would definitely pick it up if you can find it. Some of their CD’s and records are getting VERY expensive, so grab them up while you still can.