The ondes Martenot (which is French for “Martenot waves”, also known as the ondium Martenot, Martenot and ondes musicales) is one of the first electronic musical instruments ever created. It was invented in 1928 by Maurice Martenot and it’s sound was very similar to a theremin – except with much more control over the timbre of the sound.

I’d stop short of calling it a real synthesizer, but it did have switches to control the sound. It even came with 4 very different speakers that could be switched on and off. The eerie sounds of the ondes Martenot were produced by thermionic valves (or vacuum tube).

The Martenot was produced for 60 years all the way up until 1988, but a knockoff called the Ondea started being produced in 2001. 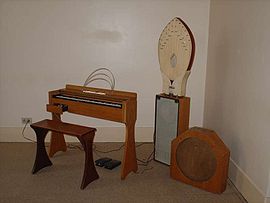 The really cool thing about this instrument is how it’s played. On first sight, it looks like it operates like a piano, however it can be played either via the keyboard itself or by sliding a metal ring worn on the right-hand index finger in front of the keyboard. This allows the musician to play sweeping, wavering sounds very similar to the theremin. The keys on the keyboard actually have a little bit of lateral motion and you can modulate the pitch of a note up or down by pushing it left or right. (Maybe all those posers who vibrate their finger on the key when they play a synth with modulated sound dream of these)

Now, it doesn’t matter if you press a key or more the ring, those don’t actually produce any sound (!). To produce a sound, first you must pull out a small drawer on the left hand side that contains various many controls. One oblong-shaped key controls the volume of the note by how far it is pressed – the deeper the push, the louder the note.Â  Additionally, how it is pressed determines the attack of the note: quick taps produce short, staccato notes and more controlled and deliberate presses play legato. 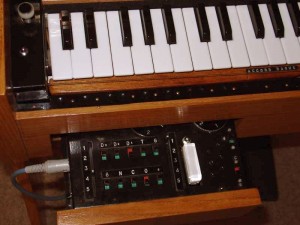 Also in this drawer are flip-style switches that control the Martenot’s sound. Each switch has its own sound color which can be stacked up to create a compound sound, just like an organ. The switches feature a sine wave, triangle wave, a pulse wave noise, and many other sounds.

If that isn’t enough, the are 4 different speaker systems (called “diffusers”) that can be used to modify the sound. There is a standard speaker, a speaker with springs that add a type of reverb to the sound, a speaker with a “gong” as a diaphragm which produces very interesting harmonics and a speaker that is similar to a stringed instrument called a Lyre – great for drones and rich textures. Of course, you can use more than one speaker at a time and switch between them on the fly (take that, Leslie speakers!) 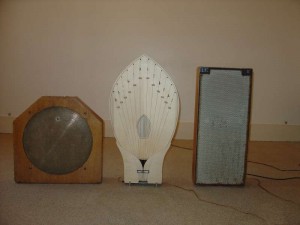 There really aren’t very many people can play this instrument as very few of these actually exist, however Jean Laurendeau is an absolute master. Here is a video of him demonstrating the instrument.