Animator Jim Lefevre has created a bunch of special 3D discs that he set spinning using an “old fashioned turntable” to create the illusion of 3D movement.

In March 2007 at the Victoria and Albert Museum in London he hosted an evening of animation related events and demontrated the Phonotrope (previously called Phonographantasmascope), an extension of the Zoetrope principle.

It is all live action and works by using the shutter speed of the camera rather than the rather irritating stroboscope methods other 3D Zoetropes use. 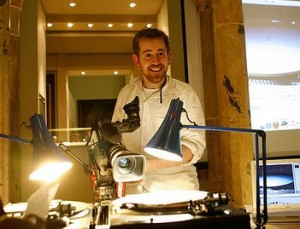 I realize that this isn’t audio-related, but the turntable (a Technics 1200) is an integral part of the art, plus it’s simply brilliant. It sort of reminds me of the “Cool iPhone Animation Creates 3D Illusion”.