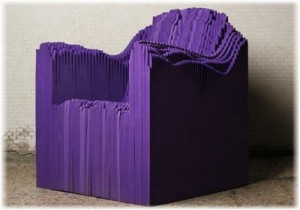 Have you ever seen a piece of furniture made of sound? The sofa/chair in this picture is exactly that, as it was made of cut polyethylene foam following a soundwave graph.

It’s the work of Matthew Plummer-Fernandez, a London-based designer of British and Colombian nationality. Prototypes of the chair were exhibited in Milan 2007, and the final product was launched at the London Design Festival in September and was in sale -since September 2008 and for the duration of 6 weeks-, at Selfridges (UK) at the price of £3950.