Creators of horror movies and TV shows love using songs in the rock and metal genres. After all, a good electric guitar riff together with strange and mysterious lyrics goes hand in hand with a goose bump inducing story-line.

Here are some of the most famous rock & horror combinations used on screen:

An American Werewolf in Paris is a horror/thriller made in 1997. While it wasn’t appreciated much as werewolf movie among the viewers, the soundtrack was impressive. Bush’s song Mouth got a lot of airplay. The song was written by Bush front man Gavin Rossdale. After an 8 year-break, Bush members got back together in 2010.

The song was in fact made for the movie. Take a look at the lyrics:

Made me give, your silver grin, still sticking it in
you have some machine soul machine, soul of Machine
The longest kiss ,feeling furniture days
Drift madly to you, Pollute my heart; Drain
. . . .
All your mental armor drags me down
nothing hurts like your mouth. . .

Mouth is featured in Bush’s 1996 album Razorblade Suitcase. The album saw number 1 on The Billboard 200 chart. 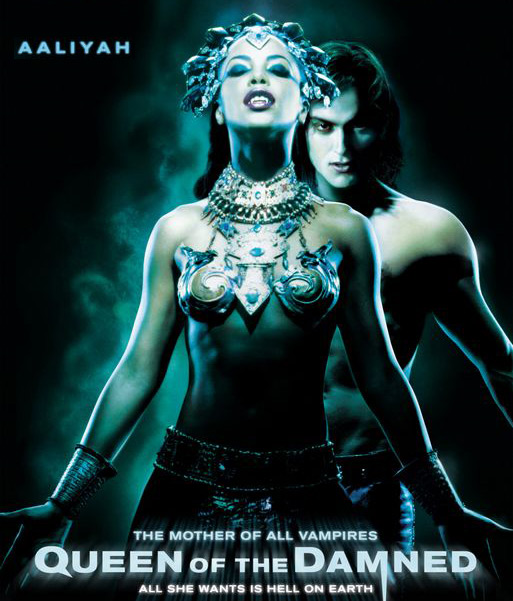 In addition to using rock and metal bands Papa Roach, Disturbed, Deftones and others in the background, vampire (horror) movie Queen of the Damned (starring Aaliyah and Stuart Townsend and ) is the tale of vampire Lestat, who wakes up from his deep sleep and decides to “adopt” a hard rock band. Instead of feeding on the members, he becomes their leading singer and together they become the new icons of gothic rock and metal.

Supernatural is a popular horror/drama that features two brothers — Sam and Dean Winchester- fighting against all things supernatural, including vampires, werewolves, wendigos, ghosts, spirits, demons and more. The show uses classic rock songs extensively, both in the background and specifically played during car rides. The older brother Dean Winchester is a die-hard rock fan. Some of the bands featured on the episodes include Aerosmith, Def Leppard, Metallica, Bon Jovi, AC/DC, REO Speedwagon & more.

The makers don’t just make sure the music fits the mood. They are also extremely careful about the lyrics as well. For instance, Aerosmith‘s Back in the Saddle was used in the episode when Dean goes back to hunting after a break. Bon Jovi‘s Dead or Alive was played by the brothers and sung along to when they were about to fight with a deadly group of demons. It also signified the fact that Dean had made a deal with a demon. In order to save his brother, Sam’s life, he had sold his soul and his end was approaching.

In season 5, the apocalypse had begun and the destiny of mankind depended on who would win the fight between Lucifer and Michael. Lucifer was using the body of Sam. Dean, wanting to help Sam out and make a charismatic appearance, entered the battlefield with his car, playing Def Leppard‘s Armageddon It.

Hit vampire show The Vampire Diaries‘ episode soundtracks are filled with alternative rock bands. Occasionally the episodes will include better known or older names such as Placebo, Black Rebel Motorcycle Club, Smashing Pumpkins, Five for Fighting, or Goldfrapp. However not all the bands featured are extremely popular.
The bands used on the show also include Paramore and The Bravery, two bands that were featured in the Twilight films as well.