Ash is a really creative and fun alternative rock band, well worth discovering if you haven’t already. Here we go:

1.) Ash is from Northern Ireland.

3.) Their band name couldn’t have been more random. They just picked up the dictionary and looked around until they saw a something they liked. 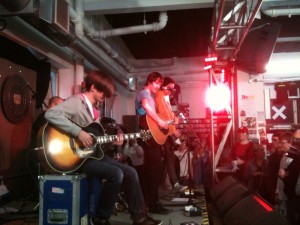 5.) In 1997, Charlotte guitarist Charlotte Hatherley joined the band, enabling them to create a more diverse guitar sound. Charlotte first played with the band on the singe A Life Less Ordinary, a song written by Wheely and was featured on soundtrack of the film A Life Less Ordinary (a romantic comedy / drama starring Cameron Diaz and Ewan McGregor).

6.) Charlotte left the band in 2006 because the band wanted to be a trio again. Charlotte currently plays with the British folk rock singer KT Tustall, who is best known for her song “Black Horse” and the “Cherry Tree”.

7.) The trio became a quartet again when rhythm guitarist Russell Dean Lissack joined the band in 2010. Both Russell and Charlotte are English.

8.) Born in 1979, Charlotte was the youngest member Ash during her time with the band. Today, Russell Dean Lissack is the youngest, born in 1981. The oldest member is the drummer Rick McMurray, who was born in 1975.

9.) Their worldwide album sales is estimated to be about 8 million.

10.) They have released six studio albums so far, with the first being Trailer (released in 1994) and the 6th being Twilight of the Innocents (released in 2007).

12.) The band was financially in trouble before the release of Free All Angels.

13.) Ash’s songs have been used in many soundtracks, both of movies and TV series. Some of the songs and the name of the show/movie are: Burn Baby Burn (Smallville, The O.C), Meltdown (Smallville, Shaun of the Dead, Teachers), Shining Light (Teachers, Roswell), Jesus Says (Swimfan, Daria), Girl From Mars (Gilmore Girls, True Love and Chaos), I’m Gonna Fall (Road Trip), A Life Less Ordinary (A Life Less Ordinary), Goldfinger (True Love and Chaos), Jack Names the Planets, Kung Fu (Angus).

14.) The band’s official website is where you can check for updates and tour dates. The band also sends you a free download of their song The Return of White Rabbit for free, in exchange for your email.

15.) The band has a presence on the social networking sites Myspace, Facebook,Twitter, YouTube, Last.fm, and iLike.