In 1951, some groundbreaking progress in the world of music technology was transforming the way music would be made today.

The University of Manchester housed the Ferranti Mark 1 computer, the successor to the famous “Baby” computer which was given life (i.e. executed it’s first code) in 1948. The Ferranti computer had a subroutine that emitted a short tone when an application finished running (They called it the “Hoot”).

This "Hoot" subroutine was modified by Christopher Strachey (a friend of one of the mathematicians working on the computer) to actually produce pitched notes that could be played successively to play songs. Thus, the first computer music was born. 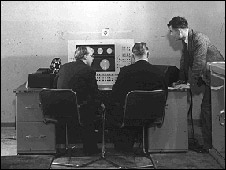 Someone had the bright idea of trying to dig up an old recording of this music to celebrate the 60th anniversary of the “Baby” computer, and they found a recording of a one-off acetate of the Ferranti playing “god save the Queen” and “Baa Baa Black Sheep” in the National Archives.

Here is a copy of the recording in mp3 format. More information about the story can be found here .

Interestingly, the original baby computer is being rebuilt.