Maybe. But not in the way you were thinking. Many people believe that a violin’s tone gets better with age. This is subjective of course, however there is a fairly large consensus when it comes to this. There are a few reasons why the age of the instrument could affect it’s tone:

Players change various components and properties, such as the size and style of bridge, the type of string and other things. In each case, the player is likely to reverse the change unless it is perceived to improve the instrument. Thus a played violin might gradually ‘evolve’ towards a preferred region in its possible parameter space. There may also be some Darwinian influence: instruments that are unsatisfactory and that cannot be thus improved will usually have a lower market value and be played by less experienced players and may disappear. Good-sounding ones will be taken care of, saved, and handed down – therefore only the good sounding ones survive. 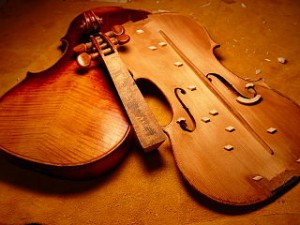 Mechanical properties change with age or with exposure to different environments. For example, woods used in string instruments often have a high ratio of elastic modulus to density, and drying of wood over time would lower the density. That being said, there is no reason to expect that age-related changes would necessarily improve an instrument.

Violin parts undergo considerable mechanical vibration during playing. One could imagine that this might alter the intrinsic mechanical properties of the instrument, plus the older the instrument the more it has likely been played. Many people beleive that this vibration “settles’ or ‘aligns’ the wood or other parts. While this is possible, again there is no reason the assume that this will actually improve the sound.

Older instruments are cherished and handed down from generation to generation. It is conceivable that the difference in tone is simply imagined as part of a musical placebo effect due to expectations or emotional attachments to older instruments. This concept is the source of endless debate in vintage instrument circles.

Of course in the final analysis it is extremely difficult to study the effect that age has on an instrument as time is notoriously difficult to control as a variable, particularly in the decreasing direction. For this reason there are few actual scientific studies (PDF file) that have offered some real conclusions. 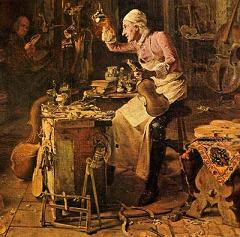 Despite this, artificially ageing violins and other instruments is pretty big business. Some companies use silicon to deal with water content issues, some use wood that is already old, and some even artificially vibrate the wood.

Well, A Swiss researcher claims that he has developed a way of recreating the unique sound of an aged Stradivarius violin by treating the wood of a new violin with a type of mushroom.

Francis Schwarze is a researcher with the Federal Materials, Science and Technology Institute of Zurich, and he has made a replica of a 1698 violin by Antonio Stradivari. He presented the violin at the Swiss Innovation Forum in Basel.

The mushrooms that he used were Xylaria longpipes which grow on the bark of some trees. Schwarze claims that the mushrooms eat away at the maple in his replica, which results in a reduction of the density of the wood and thus recreating the sound of the 1698 Stradivarius.

Noted violin maker Michael Rhonheimer has listened to the replica and the original and agrees that the process has made an audible improvement, but stopped short of declaring that they sound exactly the same.