Chaaaaaang! “It’s been a hard day’s night. And I’ve been working like a dog”

This first chord that starts A Hard Day’s Night is one of the most recognizable and famous opening chords in rock and roll. It’s played by George Harrison on his 12 string Rickenbacker.

The other reason that it’s famous is because for 40 years nobody knew for sure what it was. Many guitar players have tried in vain to recreate the sound but have usually failed miserably.

Well, someone has figured it out definitively – not a musician, but a Dalhousie mathematician.

Four years ago, Jason Brown was inspired by reading news coverage about the song’s 40th anniversary – so much so that he decided to try and see if he could apply a mathematical calculation known as Fourier transform to solve the Beatles riddle. The process allowed him to break the sound into distinct frequencies using computer software to find out exactly which notes were on the record. 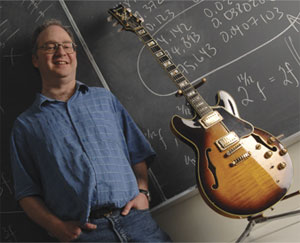 What he found was interesting: the frequencies he found didn’t match the instruments on the song. George played a 12-string Rickenbacker, John Lennon played his 6 string, Paul had his bass – none of them quite fit what he found. He then realized what was missing – the 5th Beatle. George Martin was also on the record, playing a piano in the opening chord, which accounted for the problematic frequencies.

I started playing guitar because I heard a Beatles record that was it for my piano lessons, says Brown. I had tried to play the first chord of the song many takes over the years. It sounds outlandish that someone could create a mystery around a chord from a time where artists used such simple recording techniques. It’s quite remarkable.

The Beatles producer added a piano chord that included an F note, impossible to play with the other notes on the guitar. The resulting chord was completely different than anything found in songbooks and scores for the song, which is one reason why Dr. Brown’s findings garnered international attention. He laughs that he may be the only mathematician ever to be published in Guitar Player magazine. 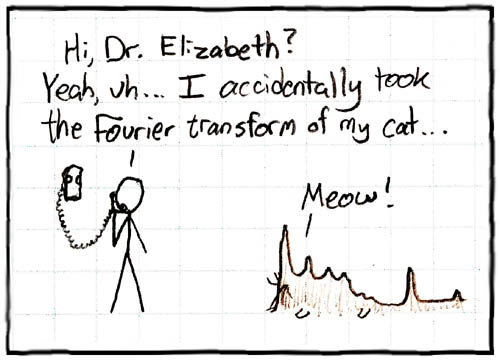 Music and math are not really that far apart, he says. They’ve found that children that listen to music do better at math, because math and music both use the brain in similar ways. The best music is analytical and pattern-filled and mathematics has a lot of aesthetics to it. They complement each other well. (comic courtesy of xkcd.com)

So how was the chord played you ask? George Harrison was playing the following notes on his 12 string guitar: a2, a3, d3, d4, g3, g4, c4, and another c4; Paul McCartney played a d3 on his bass; producer George Martin was playing d3, f3, d5, g5, and e6 on the piano, while Lennon played a loud c5 on his six-string guitar.

Here is a really good discussion of the chord, what people thought it was, and what it really is. It’s a great article and a very interesting read.

Someone has also figured out the mystery behind Stevie Wonder’s Clavinet parts on Superstition. Check it out.