Stevie Wonder‘s Superstition is definitely one of the funkiest songs on the planet – It was released way back in 1972 on the Talking Book album and climbed up the UK charts quickly. Stevie came up with the song by playing the original funky drum beat that starts the track and humming a melody over the top of it.

Superstition was originally intended for Jeff Beck as a thank you for the guitarist’s help on the awesome Talking Book album, but when Motown heard it they released Wonder’s version as a single.

The song finally got popular in the US when Stevie toured with the Rolling Stones, thereby introducing the Stevie Wonder to a largely white audience, and grabbing Stevie’s first number one hit since 1963. 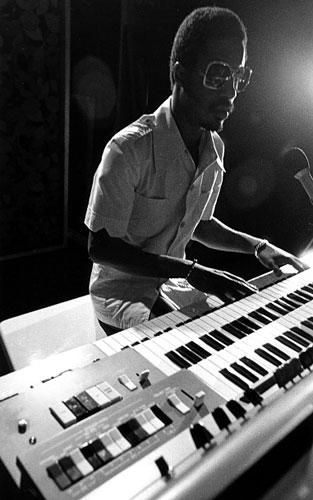 It’s of course the signature Clavinet part that just oozes the funk. In fact it was Superstition that really put the Hohner Clavinet on the map in funk/soul music. A lot of keyboard players instantly tried to cop the part, but it seemed impossible to play. Even Stevie himself never really played it properly when he played live.

It was later revealed that the Clavinet part actually consisted of two separate parts, panned hard left and right, creating the amazing polyrhythmic funk monster over which the main melody bounces. Stevie was really into synthesizer technology at the time, so the bubbling bass line was also produced by the Clavinet fed through a synthesizer.

Still, getting the Clavinet part EXACTLY right has been elusive for pretty much every keyboard player on the planet, and the exact recorded parts have been somewhat of a mystery.

An engineer has acquired the master recordings and has dissected Stevie Wonder’s multitrack masters of the song. Through the use of Protools, he was able to isolate all the tracks to get a listen to the infamous Clavinet parts. Ready for this? In reality, it’s actually 8 Clavinet parts!

Pretty interesting. It sounds like some of the grooviness is created with delays and echoes on the effect tracks. It would have been nice to hear each part in isolation, and I’ve written to the author to try and get a copy of the sound files. I’ll update this post if I hear back from him, so please subscribe to email alerts to stay up to date.

Here’s a treat: it’s Stevie Wonder and his band doing a smoking version of Superstition on Sesame street. I love how the one kid in the background is grooving out like crazy and all the other kids are standing there seemingly bored out of their minds.

Superstition has been covered countless times by other bands, most famously by Stevie Ray Vaughan and Jeff Beck, but Mel Torme also has a pretty interesting version of it on his Live At The Maisonette album from 1975.

In case you actually want to learn how to play the song, the sheet music is available for free (UPDATE: link down). We actually did another story a while back in Beatles Hard Days Night mystery chord solved , using Fourier transforms to figure out the parts. Check it out here if you’re interested.

Here’s Stevie and most of the band actually recording the song.