Gordon Moore, co-founder of Intel Corp., is well known for making the prediction in 1965 that the number of transistors on a computer chip would double every two years. Early in 2008, Intel announced a record 2 Billion transistors in 1 chip. With each new chip density record the problems of cross talk and logic gate current leakage become more troublesome to solve. The answer may be to embrace noise.

The term “noise” has a negative connotation. When a system’s performance is improved by noise, this occurrence is referred to as Stochastic Resonance (SR). This concept was introduced in the early 1980s to explain the periodic occurrence of the ice ages. Since then, the concept has been useful in understanding other natural phenomena. 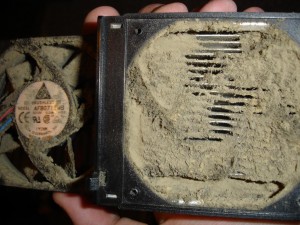 In the March 13, 2009 issue of Physical Review Letters, there is an article about researchers at Arizona State University who are creating logic gates that use the concept of SR which may expand further the limits on chip miniaturization. Read more about it here and here.

So, go ahead and embrace noise, like all things in moderation, it can be a good thing. However, if your computer is making too much noise, make sure to clean that computer fan. You may have a problem if it starts to look anything like the picture to the right.