“I Dreamt I Was A Rockstar” (self-released) is the second release from Dayton, Ohio native Tonye Christopher, whose influences range from Justin Timberlake to Kanye West to John Mayer (whose fellow sensitive singer-songwriter Josh Kelley sings Christopher’s praises on his web site). It follows on from his 2008 debut “The Puppy Love Letters” , expanding upon that album’s mellow acoustic guitar-led pop-rock to include R&B beats, synths, vocal effects and squealing electric guitars.

It’s not a mix you encounter every day. Christopher’s voice is reminiscent of Mayer’s (he has also released a Mayer covers album, “Under Covers With John Mayer” , which is being distributed with this one as a dual album) with a bit of Living Colour’s Corey Glover thrown in for good measure, and the vocals are produced in such a way that it often sounds like he’s singing over a telephone. Christopher has stated that the album is inspired by celebrity culture; the album’s opener and title track, a club banger that wouldn’t be at all out of place in high rotation on MTV, uses the odd vocal production to great effect, layering and echoing them to create a paranoid soundscape perfectly fitted to the song’s price-of-fame message.

The second track, “Blow”, is equally danceable, big-upping Timbaland and Justin Timberlake for releasing the jams that get stiletto-clad feet moving, with a clever bridge referencing some of their best-known songs. “Dear Ms Anniston (I Need You)” uses spacey 80s-metal guitars and almost dub-like production in a serenade to the Hollywood actress (albeit whilst misspelling her surname).

The R&B/electric guitar/soft-rock vocal formula is a neat idea, but it begins to get a tad samey by the fourth track, “Kanye Komplex” , in which Christopher jokingly announces himself as ‘the new king of pop’. In fact, in parts the album — especially the use of the guitars — brings to mind the other King of Pop more than Mr West, but lacks songs as distinctive as either. “One Night At The Hilton” is vaguely reminiscent of TLC’s 1995 hit “Waterfalls” , describing his regret following a one-night stand at one of the famous hotels. 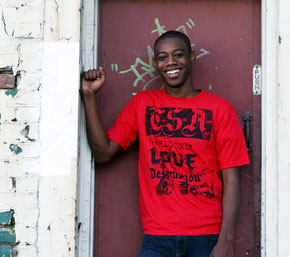 “Moving To LA” is the most Mayer-esque track thus far, with Christopher declaring his intent to move to the East Coast to pursue a girl, even employing Mayer’s trademark TMI on the bizarre-but-sweet line ‘LA is beautiful, and all the girls are boobie-ful, but I promise you your boobies are just fine’. In “Love Actually” , he continues the reassurance — ‘you’re perfect just the way you are. . . you look so delicious that it’s got me suspicious’. The song again pays tribute to Mayer, whose “Your Body Is A Wonderland” looms large over the lyrics.

“I Dreamt I Was A Rockstar” , while sonically more R. Kelly than Josh Kelley, retains the sensitive lyricism of Christopher’s debut whilst progressing toward a more urban sound to distinguish himself from the myriad other sensitive guitar-toting singer-songwriters who have sprung up following the success of Mayer et al. However, the album feels in places like a man still trying to find his own sound; it undoubtedly has massive commercial appeal, but with a little more assurance to his songwriting, his next album could really be something.