With TV shows and movies throwing around words such as anti-matter, quarks, and space-time as casually as you might say “What’s for lunch?” It’s hard to distinguish credible theoretical physics versus true science fiction stuff. The matter is worsen by the apparent back and forth in how stuff is supposed to work. Remember the ether?

Most people are aware of the word Photon to mean a discrete particle of light. You should then be able to guess that a Phonon, similarly, is a quantum of sound (whatever that means). The cool part is that you are free to come up with theories based on this similarity. For example, a black hole is mainly known by its characteristic of not allowing anything to escape. Not even photons of light. 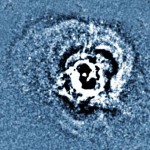 So now, we have the Phonon. Does it have an equivalent Sonic Black Hole? Apparently, yes. All you need to create an acoustic black holeis matter in the form of a Bose-Einstein condensate (matter at temperatures near absolute zero).

The Sonic Black Hole was observed as part of an experiment meant to prove that black holes should glow or give off Hawking radiation as theorized by Stephen Hawking. And here I thought black holes were supposed to trap everything. Don’t mind this little inconsistency, did you also know that singing black holes also exist.

If all of this sounds too confusing, the following video will clear things up.

Or for the college bound: Watch Video.