Fender are proud to unveil the Johnny Marr Jaguar signature guitar which has always been a long time coming. The iconic Mancunian is of course best known for his dynamic guitar playing and successful song writing with The Smiths where he essentially redefined the face of British pop with unique chiming guitar melodies, influenced from a variety of past genres of music and liberal waves. Johnny Marr’s famous passion for perfection began in his early days with the Smiths and has stretched over a long career with The The, Electronic and more recently with Modest Mouse and The Cribs; in which he would spend vast amounts of time and effort to achieve the sound he wanted. (In the intro to “how soon is now’ he used four Fender twin ups, with tremolos each slightly out of sync with each other to create that unique pulsing sound).

For Fender, this guitar really needed to reflect Johnny Marr’s unique qualities and even his reputation for perfectionism so every little detail needed to be up to scratch. That might go some way to explaining why it took 4 years to produce and presumably no corners were cut, which makes for a highly promising prospect for us guitar enthusiasts.
Luckily the final Product does not disappoint!

Lets start with the looks shall we? Being a Fender Jaguar it looks fairly traditional on first glance (which is a good thing) but when we look closer we notice the neck is a copy of Johnny’s own 1965 Jag and has been shaped to fit, with a vintage truss rod which is lacquered for authenticity and to top it off Marr’s signature on the headstock.
The body has the traditional asymmetric Jaguar shape, specifically based on the ’63 model but has a forearm contour from a mid ’50s Stratocaster for extra comfort.

Now for the more technical bits. The Fender Johnny Marr Jaguar has custom wound Bare Knuckle single coil neck and bridge pickups connected with a single tone and volume control. Innovatively Fender have changed the complicated selector switches to a blade style selector switch, which allows for individual switching between each pickup, both together, and together in series create a humbucker like tone. There are two new switches on the upper horn; a treble boost for “series’ mode and a high pass filter for all pickups or as more commonly known the “strangle control’, which sounds awesome when done properly. 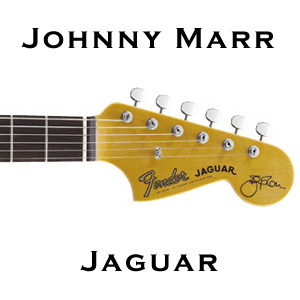 There is a taller tremolo with arm-sleeve nylon insert to prevent arm swing. As with typical Jaguar style there is plenty of eye-catching chrome on show but will be available in both Olympic White and Metallic KO (which is based on Johnny’s own ’66 Jaguar). Also the first 350 guitars will include a Johnny Marr Jaguar booked signed by the man himself.

Johnny Marr admitted, “It’s been a labour of love and an obsession, and a privilege. It’s my perfect guitar”. To say that this guitar is exciting is an understatement, a signature guitar of a legendary player who is obsessed about perfection.
A seriously good guitar.

About Author: Steven Williams works for a music and guitar specialist shop and is a massive guitar enthusiast. Writing about guitars is his passion, and enjoys giving unbiased helpful advice to anyone that wants it.