There is an episode on the Chappelle Show where Dave Chappelle is in a club and the music DJ announces a “new” Tupac song (sung by Chappelle). The comical part of the piece is the “all-knowing” lyrics of 2pac, right down to what Chappelle is doing in the present moment, even thought the “new” song was written in the past.

It’s a great piece for several reasons. If you’ve seen any of the several 2Pac documentaries, or grew up knowing 2Pac, it should be fairly obvious that Tupac’s legacy has only increased since his passing. Also, there have been numerous songs released since his passing that seem all-knowing or at least well ahead of his time both in terms of personal awareness and also in how the world works. 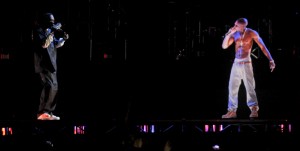 Image the surprise of music fans at Southern California’s Coachella 2012 festival when a live performance included no other than Tupac himself. The performance was that of a holographic Tupac with the real Snoop Dogg.

It’s somewhat amazing, since the term hologram conjures images of Star Wars and Star Trek. Since when has hologram technology reached this level of sophistication? I suspect this is not the last time we’ll see it use as the possibilities are endless. Who would you like to see brought back to life using this hologram technology?