An incredible new technology has led to the development of potentially some of the thinnest speakers in the world. They are wide, flat and very flexible. They remind me of the carbon nanotube speakers that we wrote about a few months ago.

OK, maybe they aren’t the thinnest speakers in the world, but darn close.

At only 0.25mm thick, the material is both lightweight and very inexpensive to manufacture. Speakers made out of this material could be used in cars, in homes, in ceiling tiles and even made into posters or pictures that hang on the wall.

Because of its large, flat surface area, the speakers produce sound waves that are planar and directional and can project further than normal speakers. This means that they could be very useful in airports or passenger terminals where conventional speakers can be very hard to hear. 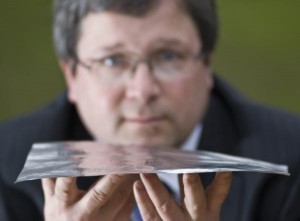 The company that produces both the material and the speakers believes that these speakers could replace conventional speakers in cars and homes and anywhere where space is at a premium. Steve Couchman, CEO of Warwick Audio Technologies says:

Another great application would be in PA systems for public spaces. The sound produced by [these speakers] can be directed straight at its intended audience. The sound volume and quality does not deteriorate as it does in conventional speakers, which means that public announcements in passenger terminals, for example, could be clearer, crisper, and easier to hear.

The speaker material is assembled from layers of very thin conductive and insulating materials, resulting in a flexible laminate structure. This laminate operates as a perfect piston, with the entire surface resonating exactly in-phase. This results in a very directional, coherent sound wave.

The material was first developed by Dr Duncan Billson and Professor David Hutchins from the University of Warwick. The proof-of-concept early prototype was as simple as two sheets of tinfoil and an insulating layer of baking paper. The two worked with new materials to evolve the design to the point of where it could be used in a commercial application.

It sort of reminds me of the tin foil/paper plate speaker.

The first commercial speakers using the technology are expected to launch later this year. I’m imagining gig posters that play the music of the band when I walk by them, wearable speakers and shower curtains that play music!