This article is a sequel to the article Astronomically Expensive Musical Instruments: Guitars and Violins. As previously mentioned, there are several factors contributing to the price of a musical instrument. Some of these factors can be listed as the level of uniqueness, previous (celebrity) owners and the materials (such as expensive metals and precious stones) used in the manufacturing.

John Lennon is a British music legend. He first shot to fame with his band The Beatles, the rock n’ roll band that defined the 60s. During its world-dominating 10 years (the band was founded in 1960 and broke up in 1970), it released 22 studio albums, many singles and LPs. The band consisted of John Lennon, Paul McCartney, George Harrison and Ringo Starr and after the band’s break-up, all members went on to pursue solo careers. Lennon’s most famous song as a solo artist is probably Imagine; the title song of his second solo album Imagine (1971). The song was recorded on a Steinway & Sons Model Z piano and the same piano was featured in the song’s video. John Lennon bought the piano for $1500, as a birthday present to his wife Yoko Ono. 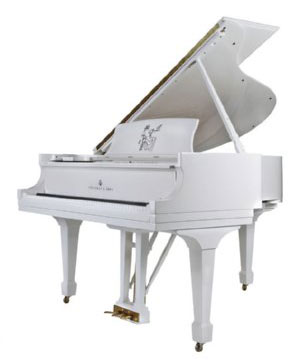 In 2000, 20 years after John Lennon’s death, the piano was bought by another famous British singer/song-writer George Michael at an auction for £1.45 million (about US $2.1 million). George Michael recorded an album using this piano. After that the piano went back to be displayed at the Liverpool Museum. George Michael agrees with the view that the piano is a very important part of British music history and should be seen by many people.

This piano model is now part of a series called John Lennon “Imagine” Limited Edition Piano (again from Steinway & Sons). It is listed on the company’s website but the price tag isn’t included.

Bösendorfer is an Austrian piano manufacturer brand (which is now under the Japanese brand Yamaha whose products include musical instruments as well) and has been producing pianos since the 1800s. Bösendorfer is the preferred brand for concert halls, music-teaching and private usage. Their models include 70, 185, 200, 214, 225, 280 and 290. Average prices for a Bösendorfer piano varies from 25,000 to $45,000 for upright pianos, and Bösendorfer concert pianos can be bought at any price from $60,000 to $180,000. 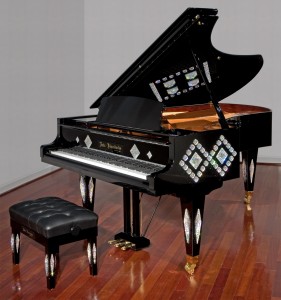 Jon Kuhn is a famous glass artist whose work is being displayed in over 30 international museums, including the New York Metropolitan Museum of Modern Art.Together with the Bösendorfer company, Jon Kuhn designed a piano decorated with 100,000 hand-cut diamonds. It’s price is estimated to be $1.2 million.

Flutes are made of different types of metals. More expensive music instruments often use higher quality or valuable materials. Expensive flutes can use metals like silver and platinum to increase the durability and sound quality.

An average flute can cost anywhere from $100 to $500, depending on the quality. However, one of the highest price tags for a flute belonged to a flute once owned by William M. Kincaid, a well-known and respected American flute player. He was born in 1895 and performed with this flute until 1967, his death. William’s flute had originally been made for the New York Fair. 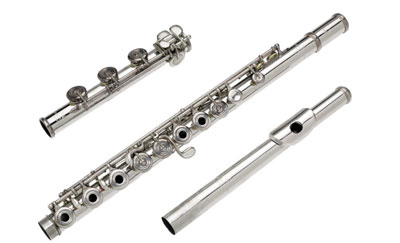