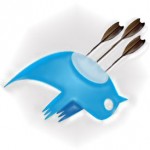 There’s no easy way to say this, but I think we need a break. As a novice Twitterer, there was a certain excitement to seeing your name on my front page every three minutes; I mean, how else would I know how much wine you were drinking or how many emails you hadn’t answered. It was like we really were best friends [even though you probably wouldn’t answer my emails]. Even when you went on tour and somehow managed to find time to play music in between expressing your opinions on weather/airports/taxi drivers, I was right there with you. But enough is enough. I can no longer deal with going onto my homepage every morning and wading through your 140-character exchanges with your boyfriend to get to something vaguely interesting. So I guess this is goodbye.

But don’t worry, I’m sure your remaining 281,275 followers will find a way to comfort you.

And with that, I unfollowed her. As @RODDYBOTTUM said about unfollowing @nicomuhly, I feel 30 pounds lighter . And I can now listen to the Dresden Dolls’ Missed Me and picture its singer as a howling scorned teenager hell-bent on revenge, instead of a 33-year-old who does yoga on the beach [check her Twitter, there’s a picture of that somewhere].

Twitter, incidentally, was what led me to this site in the first place, and therefore indirectly responsible for my starting to write for it. In a fit of boredom last week I Googled do any indie bands use twitter [or something] and found NoiseAddicts’ list at musicians who use twitter . This followed an unsuccessful Twitter search for some of my favourite artists, which was only notable for turning up a somewhat baffling page claiming to belong to Jesse Lacey of Brand New [@BNJesseLacey], which contains such expressions such as cool asian hats, pimps out someone’s Stickam channel and well, that’s basically it. If that actually is the real Mr Lacey, I apologise, and I’m really looking forward to your concert in March. But somehow I don’t think so.

Looking over the list made me wonder how much, exactly, do we want to know about our favourite musicians? In what sort of intimate detail do we need to be told about their personal lives before their Twitter-personae start bleeding into their music? How soon am I going to start listening to Bad Religion and picturing Brett Gurewitz [pardon me, I meant @OblivionPact] changing his baby’s diaper and going for a bike ride? Because, after all, isn’t the mystique part of why we love them?

With that in mind, I took a look at some of the other celebrity Twitterers. Firstly, @nickcave. Yes, the name at the top of the profile is currently Fake Nick Cave . But even if it isn’t actually the Real Nick Cave, it’s one of the funniest things I’ve read in ages [if there’s not a restaurant called Murder Salads, there damn well should be] and I highly recommend looking at it.

Then there are those pages – for example, Bloc Party [@thisisblocparty], Jimmy Eat World [@jimmyeatworld], Soulwax [@soulwax] and indie legends Sonic Youth [@thesonicyouth] which serve solely as outlets to announce tour dates/recordings and other band news. Even Bjork [@bjork] uses her page for the same purpose. Her fellow Scandinavians Peter Bjorn & John [@PeterBjornJohn], however, do not: wrote a new song. It’s called alien v.s. Santa claus. It’s a ballad.’ Followed by, another new song ready! it is a fast song about love and it’s called: “predator v.s. a puppy ‘.

So far, so un-Amanda Palmer-like. Even her touring partner Imogen Heap [@imogenheap] doesn’t give too much away, aside from the fact that she seems very friendly and nice and likes putting x s at the end of each Tweet. Dave Matthews [@DaveJMatthews], on the other hand, may not Tweet the minutiae of his personal life but does appear to have started a Twitter campaign for people to upload a profile picture of themselves giving the finger.

So, how much would you want to know about your favourite musician? If, say, Brian Eno were to start Tweeting [as opposed to his fan page, @Brian_Eno], would you prefer an impersonal news page or a sharing-is-caring extravaganza a la @johncmayer [whose Tweets you’ve all seen quoted somewhere, but include such gems as I thought I had to fart but it turned out it was just a poop. False alarm.’]

Personally, I like my idols to keep a bit of mystery. I follow several musicians [including the aforementioned Messrs Bottum and Gurewitz] whose Tweets strike a balance between informative music-related stuff and interesting personal anecdotes and who never claimed to be eccentric geniuses in the first place. But I think my reverence for someone like Faith No More madman Mike Patton would be somewhat reduced if he were to sign up and start spamming my front page Palmer-style about his favourite bagel filling or what kind of oil he uses on his bike [@RODDYBOTTUM @MRGOULD: Just took dump in hairdryer. lol. Just like the old days]. What do you think?