DJ Rana Sobhany is changing the face of modern DJing using the new Apple iPad. She got her idea to use iPads instead of turntables while she was waiting outside of a New York City Apple store at two o’clock in the morning on the day the iPad was to be released.

Sobhany first thought of different ways to DJ while playing with her iPhone before the iPad was released. In an interview with wired.com, Sobhany admits, “I just started playing with some of the music apps that were available for the iPhone, specifically the IK Multimedia GrooveMaker apps.”

She went on to say, “I got really inspired by the basic functionality of these apps and I started thinking about ways to incorporate iPad into a live performance. The more I thought about it, the more I realized that it was entirely possible to build a set around solely iPad music software and applications.” 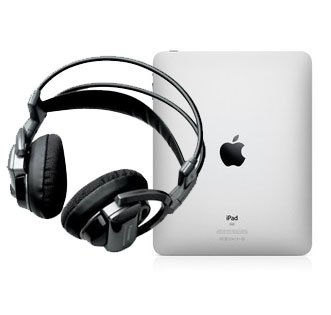 These thoughts moved Sobhany into action. Within five days of getting her iPad, she was ready to rock and roll. She wired up a DJ setup with her new iPads and began testing.
Sobhany says that one of the main reasons she thought to use the iPad was because of the basic functionality and simplicity of Apple’s GarageBand. Instead of music creation being some pie-in-the-sky, difficult task, Apple, through GarageBand, has enabled regular people to learn to create music with ease. “Lots of great bands and artists have come from the ‘GarageBand generation’ of production, as I like to call it,” she said. “With iPad, I think that a lot of people will start downloading music apps and learning to play instruments from them.”

Although million dollar studios will never be replaced by a $500 iPad setup, Sobhany does believe that the iPad will become a more utilized part of music creation in the near future. “The iPad will quickly evolve into the ideal device for music creation and DJing,” she said. “Loop libraries will get better. Hardware will get better. More hardware and software companies will build mobile apps and the users will become more savvy about what they want from the iPad. There will be peripherals that support inputs like USB and FireWire. Video remixing will be possible.”

Sobhany has found it quite simple to transition into iPad DJing. She simply connected dual iPads to a Numark M3 DJ Mixer and a sound system and she was ready to DJ. Unless she is recording what she is creating, there is no need for addition pieces of equipment such as instruments or computers.

Some Pro’s and Con’s of iPad DJing: