In this post, we put together a list of haunting soundtracks and theme songs. Not all of these songs are from supernatural or scary movies. These songs haunt us in the good sense of the word: melodies that are difficult to forget and we keep hearing and remembering these songs over the years.

[audio:http://www.noiseaddicts.com/wp-content/uploads/2011/04/ghostbusters_theme.mp3|titles=ghostbusters_theme] Obviously, the movie features a lot of ghosts. Some are friendly, many are not. The movie was directed by Ivan Reitman in 1984, starring Dan Aykroyd, Sigourney Weaver & Bill Murray. The signature song, also called “Ghostbusters”, was written and sung by Ray Parker Jr.

This adventure/thriller with great comedic elements was a huge hit. It grossed over $235 million, and was nominated for 2 Oscars, Best Visual Effects and Best Original Song. The song was also nominated for Golden Globe and it won BAFTA (British Academy of Film and Television Arts).

Ghostbusters was number one at Billboard Top 100 and number 2 on the UK Singles Chart.

A sequel was made in 1989, and a third is in the works, to be released in 2012. The new film will be featuring Dan Aykroyd, Sigourney Weaver and Bill Murray, as well as some new cast members.

(I’ve Had the) Time of My Life — from Dirty Dancing 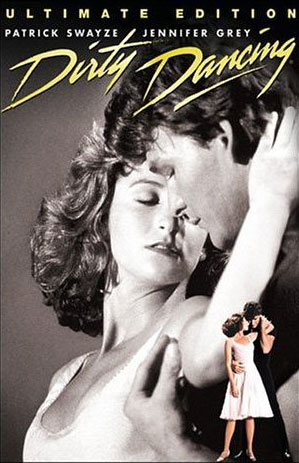 So this movie is more up girls’ alley, but still- I bet you do recognize the song immediately if you have seen the movie, or at least lived through the 80s. Made in 1987, Dirty Dancing was an instant romantic hit, bringing Golden Globe nominations for both its leading actors (Patrick Swayze and Jennifer Grey). The soundtrack featured many hits, including “She’s Like the Wind” (co-written & performed by Swayze) and “Hungry Eyes” (performed by Eric Carmen).

However the most critically acclaimed hit was the duet “(I’ve Had the) Time of My Life”, a duet written by Franke Previte, John DeNicola, and Donald Markowitz, and performed by Bill Medley & Jennifer Warnes. The song won both Golden Globe and Oscar. It was also nominated for a Grammy. In 1989, it was also chosen among the Most Performed Songs from Motion Pictures at the ASCAP Film and Television Music Awards, along with the other Dirty Dancing hit “Hungry Eyes”.

This soundtrack sold over 42 million copies around the world, having spent 18 weeks at the Billboard Top 200 list. “(I’ve Had the) Time of My Life” was originally written for Franke Previte’s band Franke and the Knockouts in 1981. The song saw number 1 on several charts, as well as many top 10 positions.

As Hollywood loves sequels, Dirty Dancing: Havana Nights was made in 2004, featuring Patrick Swayze in a supporting role as a dance class instructor. The leading characters are Katey and Javier, although the original sequel the producers had in mind would also star Johnny Castle. But Swayze turned the role down.

Theme – Pirates of The Caribbean: The Curse of the Black Pearl

[audio:http://www.noiseaddicts.com/wp-content/uploads/2011/04/pirates_carabean.mp3|titles=pirates_carabean] Well, there are ghosts and a ghost ship involved in this lovely first movie of the Pirates of the Caribbean series. The 4th one is coming in the summer.

Pirates of the Caribbean is a special movie in many aspects, especially in the sense that it turned Johnny Depp, frequent collaborator of director Tim Burton and the favorite of many independent directors, into a mainstream actor with huge box office appeal. The movie grossed over $305 million, and 3 other movies in the series were made.

(Everything I Do) I Do It for You, from Robin Hood: The Prince of Thieves

[audio:http://www.noiseaddicts.com/wp-content/uploads/2011/04/bryan_adams_everything_i_do.mp3|titles=bryan_adams_everything_i_do] Even though Bryan Adams never stopped producing (potential) hits, and he was already pretty famous and critically acclaimed by 1991, his other songs hardly match the popularity of his romantic rock number “(Everything I do) I do it for you” featured on the soundtrack of 1991’s Robin Hood, starring Kevin Costner, Christian Slater and Morgan Freeman.

The song video mainly captures Bryan Adams and his band playing in a forest, resembling the Sherwood in the film, with footage from the film. The album is featured on his album Waking Up the Neighbours and his best of compilations.

Written by Michael Kamen, Bryan Adams and Robert John Lange, the song was nominated for Best Original Song Oscar. The song won a Grammy and topped the charts for 16 weeks in the UK. The song was also a worldwide hit and remains a Bryan Adams concert favorite.

Girl, You’ll Be A Woman Soon, from Pulp Fiction

[audio:http://www.noiseaddicts.com/wp-content/uploads/2011/04/girl_woma_soon.mp3|titles=girl_woma_soon] Cult hit, Oscar winner (Best Screenplay), the Quentin Tarantino classic Pulp Fiction (1994) is remembered with his soundtrack as well as its other elements. Whether you like the movie or not, the soundtrack is pretty addictive, especially the “Urge Overkill” version of the Neil Diamond hit.

Burn, from The Crow

This song is not as better-known and often-played as the other ones listed in this article. And granted, The Crow (from 1994) gets its reputation from the movie, and the set accident that cost the leading actor Brandon Lee‘s life. However, for The Crow fans will probably remember the rooftop (running) scene, right after Eric Draven (Brandon Lee) has remembered why he came back from the dead and who he needs to kill to take revenge. The song is “The Cure’s Burn” rewritten for the movie.

After Brandon Lee, the son of Bruce Lee, was killed during a shooting scene gone wrong whilst the making of the film, the movie was finished using special effects. While the movie is a pretty solid fantasy/action/drama/thriller/romance (surprisingly, it does successfully combined all these genres), the tragedy most probably added to the movie’s reputation and popularity. After all, how many actors were killed while they were playing a dead guy?

On a side note, the Crow sequel, The Crow City of Angels (1996) starring Vincent Perez bombed at the box office. Singer Jon Bon Jovi had auditioned for the part.