Since 1997, Insomniac has produced America’s largest electronic dance music festival, Electric Daisy Carnival, at the Las Vegas Motor Speedway. This 3 day music festival was created to encourage audience participation through interactive art, roaming crowd performers, and a state of the art light and sound show like no other. The music festival, which has become a well known part of the electronic dance music culture, includes six stages with 450 theatrical and dance performances, over 150 eclectic artists, 13 interactive art exhibits, and 30 full size carnival rides.

The Electric Daisy Carnival has been such a huge success that this year’s Electric Daisy Carnival made a stop in New York where over 45,000 music and dance fanatics dressed in their best Ravewear.com costumes and enjoyed continuous entertainment from dusk till dawn on four stages over three days. As part of the unique interactive experience, festival goers are encouraged to express themselves and show their unique individuality with flashy costumes and outfits for the three day event. The NY area crowd showed up in full support as they danced and cheered on their favorite performers and songs while sporting their traditional Carnival wear of extravagant and colorful tutus, show stealing bikinis, fabulous fake fur leggings, and sassy hot pants and dresses, hoping to be spotlighted on the giant LED video displays that were shown all around the stadium. The music from the NY festival was also heard around the world via satellite radio broadcast, letting everyone get a glimpse of the Electric Daisy Carnival experience.

The excitement surrounding New York’s EDC has spread far and wide and the anticipation of the upcoming Las Vegas festival has everyone buzzing about and preparing for another exciting weekend of fun filled Carnival festivities. The 2012 Electric Daisy Carnival in Las Vegas is expected to draw over 300,000 fans for the three day weekend and organizers have even added additional stages, fireworks displays, a week long entertainment line up, and the inaugural EDMbiz Conference along the Vegas strip to heighten the experience. 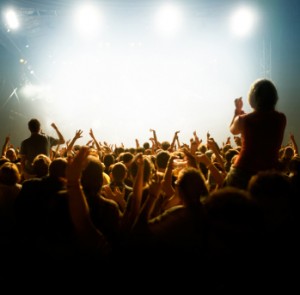 Adding to the excitement this year in Vegas, there is an incredible schedule of Insomniac events planned during Electric Daisy Week. There will be pool parties, club events, after hour parties, and more. Those who attend the sold out 16th annual festival scheduled for June 8-10th at the Las Vegas Motor Speedway will bring the city alive with their energetic attitudes, eye catching costumes, and never ending support for all that the Electric Daisy Carnival culture entails. For these dedicated fans, this is not just a musical concert, it is a creative endeavor that allows them to express themselves and live out loud in the Carnival state of mind.

Staying true to the Electric Daisy Carnival’s fun and funky form, attendees will be showing off their best at all of the festival events. In addition to the incredible line up of performers, and the camaraderie of 300,000 Electric Daisy Carnival fans, a traditional part of the culture and fun is to know just what to wear to make the most of the experience. The crowd will be dressed in creative and unique clothing, costumes,and accessories and will aim to be trend setters for future Electric Daisy Carnival events. Expect to see the audience wearing fur rave gloves adorned with feathers and animal prints, rave dance wear in all of the hottest styles and colors, form fitting fishnet dresses in various themes, and even metallic booty shorts that glisten as they groove. Just about anything goes at the Electric Daisy Carnival, and if you need ideas for what to wear, simply look at some of the photos from the recent NY event or visit a themed retailer like Ravewear.com to see the trends this wildly popular pop culture event has created.

Festivities for the three day music festival include everything you can imagine, and more. From art displays that shoot fire and water misting daisies high above the crowd, there is an adventure around every corner. The Las Vegas Motor Speedway will be transformed into a unique and unbelievable adult playground featuring live performances daily. The Electric Daisy Carnival creates an unmatched experience of sights, sounds, performances, and adventures that you will have to see for yourself to believe.

Have plans to attend the three day Electric Daisy Carnival in Las Vegas? If so, pick out your most unique and festive Carnival wear, grab your best girl or guy friends, and be prepared to have the most unique and outlandish experience of your life! If you don’t have tickets to the sold out Las Vegas event, everyone is welcome to attend any of the planned week long festivities on the Las Vegas Strip. Simply make plans to be there, figure out what to wear, and let the fun begin!