In every music genre, guitarists have made their marks throughout music history. Some of the popular guitar players include Paul Gilbert, Les Paul, Paco De Lucia and Johnny Hiland, among others. Here are some of the recognized fastest guitar players in the world across generations (alphabetically arranged):

He became popular because of his signature song Summoning Redemption, but became even more famous due to his guitar playing skills. His focus was more on metal and instrumental rock. He had a number of rough solos that were all spontaneous.

Mick Barr stood out of the music scene because of his speed and intensity in playing the guitar, and he’s reportedly been able to clock at up to 24 notes each second. His signature song is called Part 1. Using various pseudonyms such as Orthrelm and Octis, Mick Barr was able to produce avant-garde melodies.

Michael Angelo Batio is obviously a Renaissance-inspired name. Popular for this ambidextrous technique, he often uses wacky and unconventional ways to play his guitar. Some consider him as somewhat odd, but guitar experts have appreciated his musical talent.

Jason Becker is said to be a young champion of recording label Shrapnel Records during the late period of the 1980s. Later on, he was discovered to suffer from Amyotrophic Lateral Sclerosis in 1991 while working on album by Roth called A Little Ain’t Enough. This illness has left him almost paralyzed. He had a hard time talking, so continued playing his music through a computer-based program that can track the movement of his head and eyes. Despite the misfortune he had to face, his determination, courage and creativity allowed him to keep going.

According to Berney Kessel, Jimmy Bryant is one of the fastest and cleanest guitar players the world has known. Bryant has produced a number of instrumental duos together with another popular guitar player Speedy West.

Al Di Meolo is one of the greatest guitar architects in the music industry, particularly in the jazz-rock genre. He is the one responsible in bringing in the very rich cultural guitar heritage of Latin America and Spain. 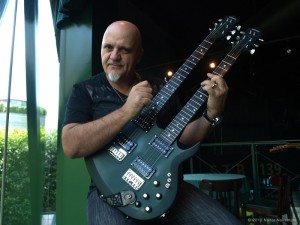 During the 1980s, Gambale proved his wit and talent as one of the popular neoclassical rockers. He became popular of this technique on progressive jazz. Gambale has been an innovator and developed his own tuning called Gambale tuning, which according to him gives him more freedom to voice any chord he wants to work on.

The music industry has a lot of talented and creative guitar players to boast. The list is very long. Leave some comments about your favorite guitar player.

Marty Friedman’s signature song is Hangar 18. He stood out because of his exotic scales. He has worked before as the lead guitarist of Megadeth. Some of the classic albums include Rust in Peace, Risk, Youthanasia and Countdown to Extinction.